When Newcastle United and Bristol City were considering pitch options at the end of the 2006/7 season, they were made aware of the excellent results of a two year trials programme that had been carried out by The Sports Turf Research Institute (STRI) to investigate the effects of using modified polyurethane fibres, in addition to polypropylene fibres, to further improve the playing characteristics of their existing Fibreturf surface.

The STRI trials had demonstrated that the beneficial effects were threefold: Firstly, a significant reduction in surface hardness resulting in less jarring of a player's limbs and a lower risk of injury in falls. Secondly, an increase in surface resilience leading to higher energy feedback to the player's feet, i.e. a less tiring surface, and also a lower ball bounce. Thirdly, improved traction offering greater resistance to disruption of the pitch surface, creating fewer and smaller divots.

In the light of these results both clubs chose to install Fibrelastic turf pitches and, subsequently, during mid May 2007, 1,300 tonnes of totally premixed Fibrelastic Turf Rootzone (FETRZ) was delivered to Newcastle and 1,200 tonnes to Bristol City. 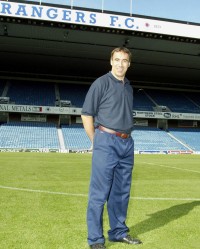 Both pitches had the existing 100mm deep upper Fibreturf rootzone removed and replaced with the FETRZ. Final finishing and seeding of both pitches was then carried out during late May and early June, respectively.

A further similarity between the two clubs was that both held a single, close-season, pop concert on their new surfaces. Although these concerts were certainly not part of the recommended treatment for recently sown surfaces, no significant setbacks were suffered and both pitches were in prime condition for the start of the 2007/8 season.

The initial feedback, as reported in earlier issues of this magazine, was excellent. To briefly recap, Newcastle Stadium Manager, Eddie Rutherford, reported that, for the first time in many years, he had not had any negative comments from players about the pitch being on the 'hard side', whilst, at Bristol City, Head Groundsman, Craig Richardson, was pleasantly surprised to receive praise for the pitch from the visiting players on the quality of the surface. Even England U21 Manager, Stuart Pearce, praised the Ashton Gate surface for the match against Poland U21s.

This initial 'good start' to both pitches was to be maintained throughout the season with positive feedback in terms of surface condition, ease of maintenance and, perhaps most important of all, the players reaction to the surfaces including frequent comments about the 'more forgiving' nature, particularly when compared to typical fibre-reinforced, sand-dominant pitches.

It appears that a 'more player friendly' surface, as indicated by the STRI research results, has indeed been achieved judging by the first full season's experiences on the two pitches. 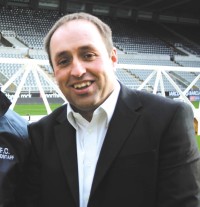 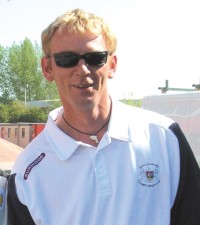 In order to monitor and record the condition of the two pitches as closely as possible the STRI's Dr. Steve Baker undertook four visits per pitch throughout the season to carry out their standard tests for hardness, traction, grass cover, volumetric water content and root depth. The most recent of these visits was in April of this year.

The individual visit reports, plus the final summary report, have, effectively, 'rubber-stamped' the feedback from the two clubs, whilst also providing a reminder that a regular aeration programme is still important in maintaining close control over surface characteristics. The STRI consider that Fibrelastic turf definitely represents a further step forward in natural turf sports surfaces and, as such, can justifiably be termed second generation or 2G fibre-reinforced natural turf.

For the 2008/9 season Newcastle United have installed two Fibrelastic training pitches. Eddie Rutherford said "After a full season of playing on the Fibrelastic pitch many players, including players from visiting teams, have commented on its performance. We have seen a marked drop in the level of divot and scar damage."

"The groundstaff have also found that they do not need to use their vertidrain so often, as the surface does not harden up like the old Fibresand pitch."
"There has been a lot of interest since the pitch was laid last year. Glasgow Rangers have been down several times to review its performance, and have now since installed one for themselves." 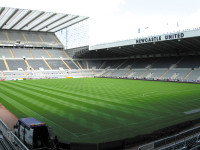 David Roxburgh said "At Glasgow Rangers we found ourselves in a position where we needed to upgrade the playing surface to the same level as our Fibresand training pitches at Murray Park."

"Having closely watched the performance of the Fibrelastic pitch at Newcastle, in terms of its playing ability and retention of grass cover, together with the research carried out by the STRI, I decided that I would install this surface at Ibrox."

"In terms of the stature of the club, and the standard of groundsmanship, we operate along the same level as our counterparts in England. The Fibrelastic pitch takes this to a new level and we all look forward to its success."

Bristol City's Craig Richardson said "The club wanted to be able to host rugby matches without compromising the quality of the playing surface and were looking at the best products available to accomplish that. This is when we were first made aware of elasticated fibre rootzone, and went to look at the trial plots at the STRI in Bingley. Having seen the plots and read the report we decided we would go ahead and install the product, the main attraction being the added traction with a reduction in surface hardness."

"The pitch maintenance is very similar to a normal fibre pitch, with maybe not as much need to spike or vertidrain as the surface doesn't feel as hard. All of the feedback from players and coaches of both the opposition and our own team has been very positive, all pointing out the pitch seems a lot softer. Even the odd, normally moaning, referee has noticed the difference!!!"

"Last season we had forty games, twenty-two training sessions, one rugby game and a pop concert. We kept good grass cover, the pitch played well and both the board and the manager were happy with the performance of the new pitch."

A further pitch installation is currently taking place at the completely new stadium at Llanelli Rugby Union Football Club. It will give rugby players the opportunity of experiencing a fast, firm, mud-free surface typical of modern day fibre-reinforced, sand-dominant pitches but hopefully with a softer landing!
Pitchcare will continue to monitor the feedback on this new surface and it will be interesting to hear, and report on, the views of the rugby players and the groundstaff.