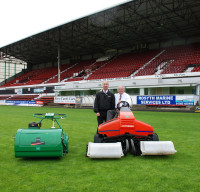 Fairways GM, the Scottish dealer for Ransomes Jacobsen turf equipment, has delivered a package of machinery to Scottish League Division One football club, Dunfermline Athletic, whose Director of Football is the larger-than-life character Jim Leishman.

Jim is a former player, coach and manager at the club and is renowned for taking Livingston into the Scottish Premier League and also into Europe. In his Director of Football role at Dunfermline he is very hands on and was the initiator of the deal to purchase the new equipment, which is being used by the grounds staff to maintain the pitch at their East End Park stadium and at their training ground.

Speaking at the delivery of the package of equipment he said,"I've been dealing with Fairways GM since they were appointed as Ransomes Jacobsen dealers, back in 2004. They are a very professional organisation and have access to a great range of products.

"We have purchased a package which includes a Tri-King triple mower, an Iseki tractor and two Ransomes machines, a Mastiff for mowing the stadium pitch and a Commander, which has five cutting cylinders and is very productive, for the training ground.

"Our aim is to return to the Scottish Premier League this season, so it's important that we have everything right across all areas of the club. This new equipment, which will ensure that we have excellent playing surfaces, is part of plan for a return to the top flight."