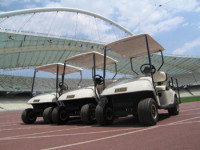 The Athens' Olympic arena was the venue for last week's Eurovision Song Contest, won by the Finnish hard rock band Lordi with 'Hard Rock Halleujah', and who provided a major upset in a competition better known for bland dance music and bubble-gum pop.

While their music and that of the other eclectic 24-nation field was being broadcast around Europe, behind the scenes a fleet of electric shuttle vehicles, provided by Ransomes Jacobsen Ltd, was being used to help with the transportation of VIP's, guests and contestants around the Olympic campus.

Supplied by their Greek distributor, Automotive Solutions Ltd of Athens, the three new shuttles were complemented by five similar machines previously used during the 2004 Olympic Games.

Richard Tyrrell, General Manager, E-Z-GO Division commented, "It's amazing how many times our vehicles are used at major events around the world. Being electric powered they are ideal for arenas and stadia as they are extremely quiet, are pollution free and are very effective as a transport vehicle for both people and equipment."

Ransomes Jacobsen is a subsidiary of Textron Inc. (NYSE: TXT), a $10 billion multi-industry company operating in 33 countries with approximately 37,000 employees in continuing operations. The company leverages its global network of aircraft, industrial and finance businesses to provide customers with innovative solutions and services. Textron is known around the world for its powerful brands such as Bell Helicopter, Cessna Aircraft, Jacobsen, Kautex, Lycoming, E-Z-GO and Greenlee, among others. More information is available at www.textron.com.