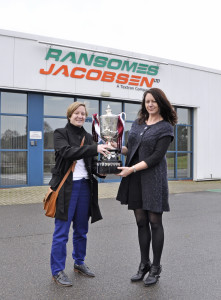 Ransomes Jacobsen, the Ipswich-based manufacturer of commercial mowing equipment for sportsfields, golf courses and sports stadia, has agreed to sponsor The Suffolk Football Association's Premier Cup competition for the remainder of the current season and through next season (2014-15). Ransomes Jacobsen is a Textron Inc. (NYSE: TXT) company.

Speaking after the signing of the agreement at their European head office on Ransomes Europark, Sam Cassidy, UK & Ireland Marketing Manager said, "As probably the oldest business operating from the county town of Suffolk, we are delighted to have signed this agreement with The Suffolk FA.

We see it as part of our social responsibility to support the town and the county that has been our home for the past 180 years and provided us with generations of loyal staff.

"Supporting sport at grass roots level is not new to us; we have supported Suffolk Schools' Golf, Suffolk Junior Golf and various individual sports people across the county.

The Premier Cup competition is now at the semi-final stage and we extend our best wishes to Bury Town, Felixstowe & Walton United, Leiston and Needham Market, when they compete in the semi-finals early in March."

Suffolk FA chief executive Laura Smith added. "We are delighted to attract such a big name, with a long and successful association to the county, to sponsor the competition.

The Premier Cup is the most prestigious of our 15 county cup competitions, as of it is contested by our highest-ranked clubs, and we now have a sponsor to match. We are very much looking forward to working with Ransomes Jacobsen in the future."

Ransomes Jacobsen is a global business and has a long history associated with some of the world's most prestigious sporting occasions. In 2012 they provided mowers, tractors and over 400 small people carriers to the London Olympics.

Their mowers have been used to prepare pitches at the FIFA World Cup finals for decades; they have preferred supply contracts with Scottish Rugby at Murrayfield, the Rugby Football Union at Twickenham, The FA National Training Centre at St George's Park near Burton-on-Trent and numerous Premiership football clubs including Everton, Tottenham, Newcastle United and their mowers are used at Arsenal's training ground. They also have a major sponsorship agreement with Ipswich Town.