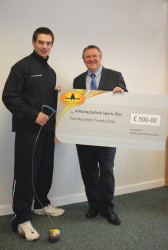 Joe Bloomfield, a hammer thrower from Ipswich, was presented with his grant by David Withers, managing director of Ransomes Jacobsen at the company's European head office in Ipswich.

"It's a pleasure to present Joe with his grant," he said. "Ransomes Jacobsen are pleased to be a business supporter of the Suffolk SportsAid Foundation and in doing so play our part in helping talented young people from the county, like Joe and Keiran, to realise their sporting ambitions. Everyone here at the company looks forward to following their progress as they compete at national level and eventually on the international stage."

Joe Bloomfield, 19, who is aiming to participate in the 2011 European Under 23 Championships and 2014 Commonwealth Games is ranked 2nd in Great Britain, and holds the number one spot in Scotland in the Hammer at under-20 level. He finished second in England Open in 2009, second in the English Schools Championship and won the Scottish under-23 championship and the Bank of Scotland Hammerama Grand Prix. In Europe he finished third in the Gothenburg Grand Prix.

Keiran Clements, 16, is ranked first on the 'Power of 10' rankings in his age group for the mile. His team won the South of England Road Relays and National Road Relays, came third at Mansfield National Cross Country Relays, South of England Cross Country Championships and the National Cross Country Team Events. Individually Kieran's best performances include a second place at the UK Inter-Counties competition, first in the Peter Coe Junior Men's Mile and fourth in both the English Schools and the AAA's 3,000 metres.

The Suffolk SportsAid Foundation was established two years ago to help support Suffolk's talented sportsmen and women to achieve their sporting goals. To receive a grant, athletes must first be identified by their sport as having the potential to achieve at the top level. To date 50 grants have been awarded to talented young sportsmen and women from across Suffolk, all of whom are competing at either national or international level.