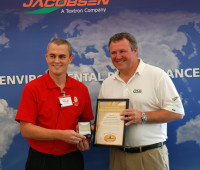 Ransomes Jacobsen, the Ipswich-based turf maintenance equipment manufacturer, has become the latest Suffolk business to positively encourage Suffolk's sporting stars of the future. The company has become the most recent Gold supporter of the Suffolk SportsAid Foundation.

The sole purpose of the Suffolk SportsAid Foundation, which was launched just ten months ago, is to raise resources to support Suffolk's up and coming sportsmen and women with the costs associated with competing and training at the highest level. Conservative estimates suggest that it costs around £5,000 a year for an up and coming athlete to compete at national level.

Managing Director David Withers said, "We are delighted to come on board as Gold Supporters of The Suffolk SportsAid Foundation. For over 200 years we've been part of the community here in Suffolk and as a major employer we have a duty to support initiatives in Ipswich and across the county.

"The equipment we make in Ipswich prepares the playing surfaces for elite sportsmen and women across many sporting arenas and by supporting aspiring athletes from the county, perhaps they will, one day, compete at the highest level. 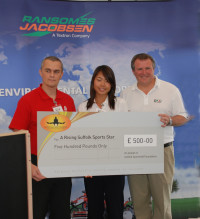 "We sincerely believe that our support can help young athletes progress and move on to the next level and eventually, with determination and application, onto the world stage and perhaps the London Olympics in 2012."

The Foundation has quickly become established as an important source of funding and has already managed to support 25 of Suffolk's brightest prospects. The latest athlete to receive support is 14 year old golfer, Heidi Baek, who plays off a handicap of 1. Heidi is the current National under 15 Girls' champion and was in the England Girls' under 18 team that recently beat Scotland, Wales and Northern Ireland in the home internationals, played at Panmure near Carnoustie in Scotland.