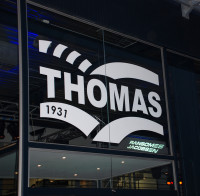 Firma Thomas bvba, RANSOMES JACOBSEN's distributor for Belgium and Luxembourg, held a gala opening event recently to celebrate the official commissioning of their new premises in Merchtem, situated between Antwerp and Brussels.

The official opening was conducted in the presence of over 400 guests, who included customers from their agricultural and grounds care divisions, representatives from the major suppliers and manufacturers plus local dignitaries including the mayor and the local pastor.

In his address to guests Frank Thomas, a director of the family-owned company, paid tribute to the support they had received from their major franchisees, New Holland and Ransomes Jacobsen and had special praise for John Moore, Ransomes Jacobsen's Territory Manager saying, 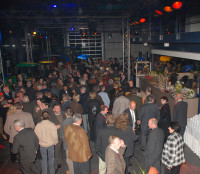 "John has been tremendously helpful and extremely professional since we joined their distributor network at the end of last year. He has supported us throughout this venture and has become a valued colleague, highly respected across our business."

The company was established in 1931, trading as blacksmiths and later diversified into agricultural contracting harvesting and threshing cereals. By the 1950s, the second generation of the family had acquired the Ford tractor franchise and was also the distributor of Ransomes ploughs! With the decline in the agricultural sector in the late 1980s, the third, and current, generation entered the grounds care market and in 1992 secured the distribution rights for New Holland compact tractors and Beaver mowers. 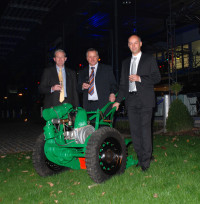 Commenting at the reception following the official opening by the Mayor, Mevr Eddy De Block and blessing by Pastor Pater Karel, John Moore said,
"We were delighted to welcome Firma Thomas into the distributor network late last year and congratulate Frank and his team on this magnificent new building. They have been established for over 75 years and have a superb reputation across Belgium and Luxembourg. They are a professional organisation with an excellent knowledge of their territory and business sectors and are playing a significant part in our business expansion plan, going forward."

Ransomes Jacobsen is a subsidiary of Textron Inc., an $11 billion multi-industry company operating in 32 countries with approximately 40,000 employees. The company leverages its global network of aircraft, industrial and finance businesses to provide customers with innovative solutions and services. Textron is known around the world for its powerful brands such as Bell Helicopter, Cessna Aircraft Company, Jacobsen, Kautex, Lycoming, E-Z-GO, Greenlee, Fluid & Power, Textron Systems and Textron Financial Corporation. More information is available at www.textron.com.