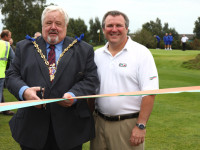 Over 50 guests from across the industry and from the companies who had contributed to the design and construction of this unique course, attended the official opening lunch where the Mayor congratulated Managing Director David Withers on the company's latest initiative.

"Ransomes Jacobsen, through their various incarnations, has been a manufacturing presence in the town for over 200 years and for 175 of those years have been manufacturing mowers," Councillor David Hale said. "It's a tremendous achievement and one that we can all be proud of. David Withers and his team are at the forefront of environmental awareness in their industry and this new golf course has been built following those guidelines. I am delighted to have been invited to officially open this new facility."

Responding to the Mayor, David Withers thanked everyone involved in the project including Howard Swan and James Edwards of Swan Golf Designs, the architects of the course; Rainbird Europe who supplied the irrigation system; Tarmac Topsport providers of all the rootzone material and Barenbrug for the various grass seed types used around the course. He also expressed his sincere thanks to the Golf Environment Organisation for their support; as well as Mike Wood for his guidance on indigenous planting for the lake and surrounds, and Grassform, who were the main contractors for the construction.

Following lunch, the Mayor cut the ribbon to officially open the course and the Academy players from Ipswich Town Football Club played an exhibition match on the 7-a-side football pitch, which also forms an integral part of the new area and doubles up as a noise testing area for the company's products.

David Withers then conducted a tour of the manufacturing facility with some of the guests, while others took part in a golf competition on the new course. Joint winners of the golf were Damien Ribbans of Genesis Orwell Mencap, who supplied bespoke hardwood furniture for the course and Les King, who refereed the football match and is a retired employee of Ransomes Jacobsen.

"This has been a great project, and we are so pleased with the result, which reflects the quality of the team we put together. We have about 1000 visitors a year coming through our Ipswich facility and we can now demonstrate our machines as well as our acknowledged environmental leadership. It has been a superb day and an excellent opportunity to thank everyone involved in the construction and an added bonus was that the weather was in our favour as well," said David Withers.

Environmental issues have been carefully factored into the planning, design and construction of this new three-hole short course.

From an early stage it was agreed that the project, although small in scale, should carry through recognised best practices and principles in environmental sustainability.

Interesting areas of natural vegetation and individual trees were retained. Vegetation removal was minimised, and heather that was stripped, stored and later re-laid to frame the edges of the bunkers.

The landscape and planting plan was also carefully designed to minimise environmental impact; only native species have been utilised. Close attention to detail has been particularly important in species selection, woodland edge enhancements, and methods to increase habitat diversity without damage to areas of existing ecological interest.

The drainage system is simple, based on sustainable drainage principles including the creation of gentle slopes to shed water into open swales, and ultimately feeding into the new water feature.

The lake design has been a key component of the project. It has introduced a significant body of new open water and wetland into the business park. As the lake naturalises over time, it will provide a mixture of open water and dense wetland habitats. Wetland plants are being sourced from other local donor sites.

Very little soil was imported into the site and the majority of the aggregate removed from the lake, which totalled 5,000 m³, was recycled into contouring the entire area. The timber decking area which overlooks the lake as well as hardwood furniture around the course, are all FSC certified.

The grass seed mixes were selected to benefit from the latest advances in breeding for adaptation to changing climate, disease resistance and modern playing demands. Cultivars of fescue, bent, ryegrass and meadow-grass species were chosen, as well as native wildflowers appropriate to the free-draining soil conditions.

Each of the three tees and greens have been seeded with different grass species, which were specifically selected with a view to reducing irrigation requirements, and to facilitate the adoption of a zero fungicide and insecticide policy for the long term management of the course.

Water consumption is minimised by keeping the area of amenity grassland as small as possible. In addition, irrigation water will utilise recycled water from the industrial processes within the manufacturing facility.