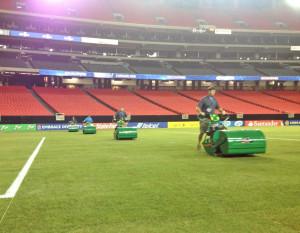 Temporary pitch constructed in the Georgia Dome in Atlanta

Precision Turf, a US-based sports turf contractor, installed a temporary natural grass pitch above the permanent artificial playing surface in the Georgia Dome, for the two quarterfinal matches and requested the use of Ransomes Mastiff walk-behind mowers, after seeing them at a trade exhibition.

"We saw the Mastiffs at the Sports Turf Managers Association (STMA) conference earlier this year and thought they would be ideal for this project," said Eric Holland of Precision Turf. "We love the quality-of-cut and the beautiful striping they provide."

"We've seen a great deal of interest in the US for the Ransomes Mastiff walk-behind mowers," said Bryan Holby, a Product Manager at Jacobsen, Ransomes Jacobsen's sister company, based in Charlotte, North Carolina. "Sports turf managers over here like the productivity of the mower's 36" width-of-cut, along with the vivid striping it produces."

For Precision Turf, who has completed five indoor natural turf installations since 2009, mowing the grass is the easy part. The company typically grows over 120,000 square feet of turf on its farm outside Atlanta specifically for this application. The company transported the turf in rolls to the Dome, where a fascinating transformation takes place.

After the stadium team covers the artificial playing surface with waterproof membrane and plywood, Precision Turf lays down strips of turf approximately 45 feet in length. 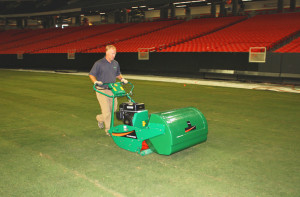 ously adjusted to ensure a true and level playing surface. After installation, the turf is heavily watered, rolled in two directions, and mowed with four Ransomes Mastiff mowers. The whole process takes less than three days.

"For our team, the biggest challenges isn't here at the stadium, it's managing the grass back at our turf farm," Eric Holland added. "In preparation for a game back in February 2011 it rained so much that we rented helicopters to hover over the fields and dry out the grass. Now that was a sight to see."

Precision Turf's team was supplemented by a group of local sports turf managers and suppliers who volunteered to help out for the big event.