by External source
in Machinery & Mechanics, Training & Education, and Industry News
on 29 May 2016 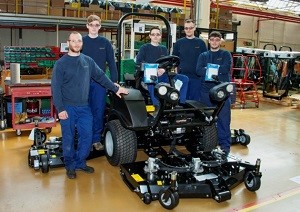 The East Anglian Daily Times reports that besides showcasing some of its latest mowing machinery, alongside a number of historic models, the firm will also be promoting the range of apprenticeship opportunities on offer.

A total of 18 apprentices are at present learning their trade at the manufacturing facility in Ipswich, with a further six to eight expected to be offered places on the scheme following a new round of recruitment currently in progress.

"The craft and technical apprenticeship scheme at Ransomes lasts three years, with a possible fourth year for apprentices who have excelled during their time with the company," a spokesman for the company told the local paper.

"The first year of the scheme is comprised of three-monthly rotations, whereby apprentices will have the chance to work in the weld shop, press shop, machine shop and blades and cylinders sections of the factory.

"In the second and third years, apprentices will specialise in the area that they have shown the most interest and aptitude in."

A number of current Ransomes apprentices will be present on the company's stand (Number 93) at the Suffolk Show, which takes place on Wednesday and Thursday, June 1 and 2, and will be available to discuss the apprenticeship programme with anyone interested in learning more about it.

Apprenticeships at Ransomes are open to two age groups - those aged 18 and under and those aged between 19 and 24.

The scheme is run in conjunction with Colchester Institute and apprentices are expected to spend one day at college and four days at the company's factory per week.

Once applications are received, applicants will be asked to attend an interview which consists of a factory tour, followed by a 30 minute interview with a factory manager.

Applications are accepted each year from March onwards and the next intake of apprentices will start on September 1.

Ransomes reintroduced an apprenticeship programme three years ago in response to a looming skills shortage, with many of its factory staff approaching retirement age.

With around 150 staff currently working in the factory (out of a total of around 350 people employed by Ransomes Jacobsen in Ipswich which is also the US-owned company's European headquarters) the arrival of the apprentices has already had an impact on the overall age profile.

More importantly, the company says that the benefits of the programme are set to far outweigh the cost in the long run, with a number of senior factory roles currently being occupied by former apprentices and a good chance that some of the current crop will go on to emulate them.

For the original article, visit landpower.newsweaver.co.uk.