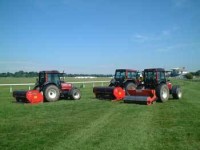 York racecourse has made a rapid recovery following the Royal Ascot At York mid June meeting, which saw 400 to 450 horses pounding the track over five days.

"Considering that this is the first time we've hosted a meeting of this size - our usual events are over two days involving approx. 140 horses - the condition of the course was as we anticipated," says head groundsman Stuart Arksey. "But with only three weeks to go before our next meeting it needed to make a quick recovery."

Seward Turf Maintenance, based at Wigginton just six miles away, and who count York Racecourse as one of their regular customers, responded to a call to overseed the home bend as quickly as possible.

"We went in a week after Royal Ascot at York, did a bit of verti-draining, and then re seeded the area which had been prepared by the groundstaff," recalls M.D. Mike Seward. In a three man operation using the company's two new 2.6 heavy duty verti-drains and Vredo disc seeder Seward Turf Maintenance completed the job in two to three days, and such were the weather conditions, wet and warm that the new ryegrass mixture germinated and began to strengthen the existing sward in time for the next meeting.

"They really helped us out," continues Stuart. "We've had another two day meeting since then on the 22nd and 23rd of July, and the three day Ebor Festival in mid August. Sewards are coming back this month (Sept.) to scarify a sample patch at the two mile start, using the scarifying head on their Koro Fieldtopmaker."

For further information on the services of Seward Turf Maintenance, contact the company on Tel: 01904 765949 or visit their website at www.sewardturf.co.uk