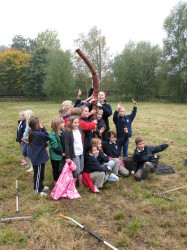 The glasshouse unit at Writtle College is being used to grow 5000 Oxlip (Primula elatior) plants from the seed collected in the Parish of Great Bardfield. October 15th marked the day the children from the village Primary school arrived at the College to collect the Oxlip. These are now being replanted at two sites within their parish.

The project has been introduced to Great Bardfield so the people of the parish can take action to protect the rare Oxlip plant. The Oxlip plant has always been famously associated with the Parish and is still used as the symbol of both Great Bardfield and the school. The project offers the village an excellent educational programme, as well as avoiding the extinction of Oxlip in the village.

The seeds are being grown at the College over a three year period as part of the 'Bardfield Oxlip Recovery Programme', which has been funded by the Local Heritage Initiative (Lottery) and the Nationwide Building Society. Further collections from the College are scheduled to be made in the Autumn of 2008 and 2009.

During Charles Darwin's lifetime there were several thousand plants recorded in Great Bardfield, just two years ago there were only 12 of the plants left. The plant is nationally scarce with a very limited distribution and a survey conducted by the Essex Wildlife Trust in 2002 revealed that there was a significant decrease in the number of plants in the country. This decrease was mirrored within the parish of Great Bardfield

A local volunteer from Great Bardfield, Doug Joyce, collected the seed and passed it on to the College to germinate and grow on in the glasshouse.