Sulekha Varma is one of a growing number of young women taking prominent roles in horse racing. As Clerk of the Course at Market Rasen, she and her team of four groundstaff have won 'Best National Hunt Track' in the annual Neil Wyatt Awards

Delivering safe, consistent going, summer and winter, for a popular jump racing programme is a tall order for any racecourse. The effort put in to achieve this by Market Rasen in Lincolnshire, with a team of just four full time groundstaff, has been recognised with the title of best national hunt track in the Neil Wyatt Groundstaff Awards.

Clerk of the Course, Sulekha Varma, gives the majority of the credit to her highly experienced and dedicated groundstaff team. "They know their job and how best to achieve it," she says.

Sulekha has been in the role for just over a year, and also has responsibility for nearby flat racing track, Nottingham, that is, like Market Rasen, owned by Jockey Club Racecourses.

With nineteen fixtures scheduled for 2011, Market Rasen is at the forefront of the summer jumping season, hosting the Summer Plate in July and Prelude Chase in September, two of the campaign's most prestigious prizes. The consistency of the going has attracted increasingly large and high quality fields throughout the summer campaign. 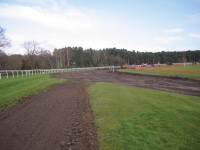 A product of the British Horseracing Authority's graduate programme, Sulekha was a keen horse rider as a child, but initially planned to be a racing journalist. Jobs with trainer, Lucinda, Russell, and in Arab racing, led to a trainee clerk's role at Haydock with mentor Kirkland Tellwright and, when Nick Patton moved on from Nottingham and Market Rasen in 2010, Sulekha stepped into his shoes.

At the time, Market Rasen had just seen a £300,000 redevelopment programme, which involved the incorporation of the old point-to-point course into the main track.
"This involved the relocation of the service road that was formerly on the inside of the track, returfing this ground, moving the ring main and resiting some greens and tees on the golf course in the centre," Sulekha explains. "The bend out of the back straight was also rebuilt and recambered, and ground on the Bungalow Bend after the winning post incorporated by extending the culvert and levelling the remaining ground."

The work was completed in summer 2008, but it was January 2010 before the new ground was ready to race on. 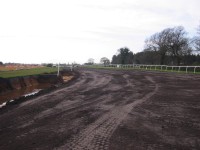 "We have used Sheppy No 16 (18:2:12) fertiliser, supplied by Lincsgreen, to encourage new growth, and we vertidrain the ground regularly too," says Sulekha. "The main benefit of the redevelopment is that it gives us a lot more space to work with, so we can rest the inside of the track through the summer and offer fresh ground in the winter - we are not racing over ground that has been watered all summer."

She adds that the new ground is also quicker than the rest of the course, allowing Market Rasen to present good to soft conditions in the winter when other courses are often soft to heavy.

Producing consistent, good and good to firm going throughout the summer months is a constant challenge, Sulekha reports, especially as the last two seasons have seen a drop in rainfall. 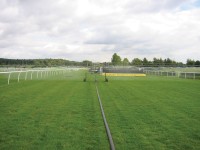 The Market Rasen team relies heavily on irrigation, with an abstraction licence allowing pumping of water into two reservoirs on the course twice a year from a beck running through the centre of the course. It is used to feed a Briggs boom system, supplemented with sprinklers on the bends.

"In the summer, we narrow the course right down and use the outside of the track which allows the boom to reach right across," Sulekha explains.

"We spike and slit after irrigating to help the water get into the ground, and our vertidrain has been a godsend," she adds.

Intervals between meetings range from one week in the summer to six weeks at the end of October, and head groundsman, Steve Bakin, and his team fork the track and add a standard sand, soil and seed divot mix provided by local supplier Lincsgreen to help the surface recover. 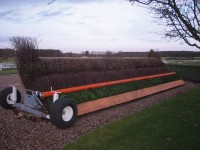 "Steve has been at the course for thirty-six years and has been head groundsman for fifteen of those, so he has seen a lot of changes and developments," says Sulekha, "His knowledge and experience is invaluable to me."

After much research and consultation, these were constructed on steel frames which are mounted on jacks, allowing them to be wheeled into position.

"This allows us to move them into the compound for storage or renovation, to shift them around the course to rest take offs and landings, and to enable them to be used across the different sections of the course," she explains. "The fences seem to jump well and the jockeys have been complimentary about them. They also look identical to traditional obstacles without the need to replace rotten wood or repaint them." 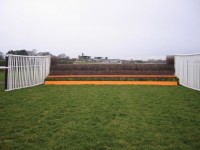 Ongoing work at the course includes a sand slitting programme, along with laying of a pipe drain to improve drainage on the former point to point course ground. A drain jetter is also hired in on a regular basis to clear and reinstate old clay pipes on the course.

"Waterlogging has been a problem at this course in the past, but now we have the tools to prevent it. By making use of old pipe drains, we are improving the drainage without the expense of a completely new system. Contractors Fineturf worked on the drainage programme in conjunction with Steve Bakin and Mike Harbridge of PSD."

Steve and Tim are assisted by tractor driver Neil Bennett and, on a part time basis, by Phil Hall who also looks after maintenance. Gardener, Ian Frankish, joined the team in October 2010 to maintain the racecourse grounds; he also helps out on the course at busier times.

"They are a small team, so what they achieve is all the more impressive," says Sulekha."I have learned a tremendous amount from them and their experience has been crucial to me in my first Clerk's role."