Rats and mice pose a major threat to health. A recent article in the Public Health Journal described rats as Public Enemy Number one!

Recent reports from the National Pest Technicians Association and Leicester University identified both a massive 31% increase in rodent population and an increasing number of rats and mice which are immune to poison rodenticides. 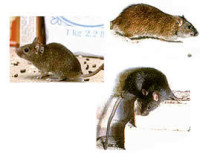 Rats and mice in your home or work place will have been active in and travelled through sewers, drains, dustbins, litter bins, waste sites etc and will be carrying the residues of such activity. Rodents urinate continuously causing pollution of food and water. A rat expels up to 5.5 litres of urine per year. Human infection is most often caused by contact with urine. Rats produce about 40 droppings per day, mice about 80. Therefore anywhere which has been visited by rodents will be infected.

Rodents also cause damage to property. They can chew through almost any material including masonry, steel plastic electric cables water pipes etc posing a threat of flooding or fire. Rodents colonise and when one has entered your environment others will be quickly drawn to it. Rats and mice breed quickly producing many hundreds of offspring each year. Quick action will prevent a much larger problem developing.

Egg damage caused by rats
and mouse droppings in kitchen. 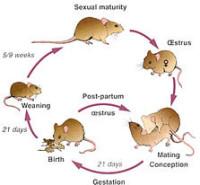 Life Cycle of Rats and Mice

Rodent damage to wiring and pipes can cause flooding and fire.

Changes in weather patterns caused by global warming, wet weather and mild winters have allowed rats and mice to thrive . Flooding drives rodents into homes and buildings for safety and shelter.

Government legislation requires that we all, as individuals, householders, businesses and organisations, take steps to control rats and mice and it is important that action is taken as soon as their presence is identified.

What should I do?

Don't Panic! Most problems can be dealt with 'in house' at relatively low cost.

Currently on the market is a range of non-poisonous pest control products including The Zapper which is the most modern, humane and environmentally friendly method of control.

Pest Control companies will usually use poisons. Charges will vary from a 'one off' treatment charge for around £50.00 to a course of treatment which may cost several hundred pounds. One off treatments rarely cure the problem and you will incur an ongoing cost. Before using or allowing use of poisons in your environment, consider the following:-

Do you want poisonous chemicals in your environment?

Rodents which have taken poisons take many days to die. In the meantime they are moving around your environment and may pose a threat to children or pets. A cat or dog or bird which takes a poisoned rodent may become a victim of 'secondary poisoning' which could be fatal or at best require expensive treatment by a vet. The government department DEFRA ( MAFF) states that " Every year dozens of cats and dogs are killed by eating illegally poisoned foods". Poisons also pose a threat to wildlife. A recent study of barn owls killed in road accidents or by starvation found the proportion with poisons in their liver had increased from 5 to 38% between 1980 and 2000. Environmentalists are seriously concerned about the effect on other wildlife of eating rats which have been poisoned, whether caught live or found dead by their predators.

Where will the rat or mouse die?

A poisoned rodent may well die in your building, under floorboards or in a wall cavity. This can produce revolting smells and the health hazards associated with a dead animal, attracting flies, maggots etc.

If you contact a pest control company ask them about disposal of dead rodents. Government legislation requires that poisoned rodents should be searched for and disposed of by burial or burning. Placing small amounts of poison in bait trays or boxes is quick and easy but you may be left with the consequences. The Zapper eliminates poisons and chemicals.

What are my Options?

Can be successful but you will have to kill and dispose of the trapped animal . Because other rodents recognise the trauma of a live rodent in a trap they may become 'trap shy'.

Not always fully effective and you may be left with a live, injured rodent to be disposed of. Very messy and clean-up will involve blood and gore with possibility of contamination and disease. Again, trauma will cause trap shyness in other rodents.

Regarded by many as barbaric, these should be used only as a method of very last resort, if at all. Rodents stuck to glue boards have been known to chew off feet and tails in an attempt to escape or be cannibalised by others. Glue boards must be checked every few hours and you may have to dispose of a very aggressive live animal.

Reports vary. - Can be successful but rely on filling the area to be protected with a high frequency sound which is unpleasant to the rodent. Therefore a room with furniture or other goods in it will be difficult to protect as this will cause 'shadows' and sound will be absorbed by soft materials.

Also the ultrasonic will not reduce the overall problem but simply move it to another location. Some pets show signs of sensitivity to ultrasonic sound.

A safe, humane, clean and environmentally friendly way to deal with rats and mice. Will provide many years of service and reduce poisons and chemicals in the environment. The Zapper can be purchased on-line from the Pitchcare Specials counter in the shop.

Rodents can enter via gaps and holes as small as 6mm (about the thickness of a pencil!).
Block holes, seal gaps under doors and cover drains. Rats are known to access via toilets. If you find rodents in your environment check for damage to wiring, pipes etc. Keep foodstuffs in secure cupboards and containers. Clean up spillages. Clear away any leftover pet foods and spillages from bird tables. Keep refuse in secure bins. Do not leave plastic bags of rubbish outside over night.