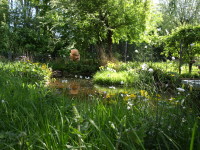 "Ratty's Refuge", the medal winning River & Rowing Museum's Chelsea (2008) urban garden has been reinstated at the Museum's Thames side home in Henley. Sponsored by British Wild Flower Plants (BWFPs), (who also sponsored the Chelsea design) the new garden, which was opened by Alan Titchmarsh on 1st May incorporates many of the original features including in the wild flower bank, the decking (now being recycled for the third time, having started life as the Museum's café terrace) and the pond, but it has grown to over five times the original size.

Ian Forster, Marketing Manager for BWFPs says that there are now four distinct areas, the pond (considerably larger than the original), a bog garden, a shaded area and woodland. "The garden was conceived to demonstrate an urban sanctuary for the water vole (Ratty), which was, and still is being threatened by the American Mink," he explains. "As last year marked the centenary of 'Wind In The Willows' it seemed the perfect opportunity to raise public awareness. This larger garden expands on the 'Wind In The Willows' theme using wooden statues to represent the famous animal characters in their natural habitat. 'Badger' for example is in the wooded area, 'Moley' in the shade, 'Toad' in the bog garden and 'Ratty' in the pond." 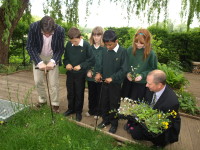 Forster has planted around 1,000 British wild flowers including water loving plants such as Lesser Bulrush, Marsh Marigold, Water Avens and Yellow Flag Iris in the bog garden, Primroses, Yarrow and Jacob's Ladder in the shady area, Oxeye Daisies in sunnier areas and our native British Bluebell in the wood. "As well as highlighting the importance of protecting our native wild life this garden has given us the opportunity to demonstrate what grows where," Forster continues, "and unlike the Chelsea design, which had to be planted to look good for the one week of the show, this is permanent. It means that we could use a much wider variety of species that will bloom right through the year."

Following the May 1st opening 'Ratty's Refuge' will be used as an educational resource to demonstrate a natural water vole habitat to visiting schools, families and special interest groups to the Museum.

For further information on British Wild Flower Plants, contact the company on Tel: 01603 716675 or visit their website at: www.wildflowers.co.uk