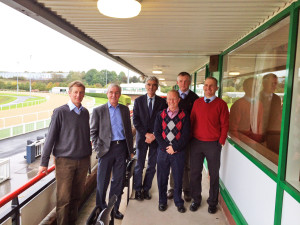 The Racecourse Association (RCA), in association with Pitchcare, ALS and Watt Fences, has announced the winners in each category of the 2014 Racecourse Groundstaff Awards. The annual Awards celebrate the hard work of racecourse groundstaff teams across the country who maintain and develop the racing surface.

Racecourse groundstaff were judged in three categories, Jump, Flat and Dual Purpose with Plumpton, Hamilton Park and Carlisle coming out on top in their respective categories. The RCA Showcase Awards will once again play host to the presentation of the overall award in 2014.

There was further recognition for the Plumpton team as long standing Clerk of the Course Mark Cornford received the Neil Wyatt Lifetime Achievement Award. Having worked at the Sussex course for over thirty years, the judges commended Mark on his efforts in overseeing widely recognised improvements in the track as well as a significant investment into the development of the Parade Ring.

In addition to the categories above, the team from Wolverhampton Racecourse, led by Elizabeth O'Flaherty, were awarded a discretionary Merit Award by the sponsors Pitchcare, ALS and Watt Fences following their excellent work during refurbishing of the track and the site as a whole.

The judging panel consisted of representatives from the RCA, British Horseracing Authority and National Trainers Federation.

Caroline Davies, RCA Racecourse Services Director commented; "We are delighted to announce Plumpton, Hamilton Park and Carlisle as the winners of the 2014 Racecourse Groundstaff Awards and look forward to the announcement of the overall Champion at the RCA Showcase & Awards at Haydock Park in November. We always look to promote the good work of racecourse teams and we are delighted to do so again within the RCA Showcase & Award."

Chief Executive of the National Trainers Federation, Rupert Arnold stated; "Groundstaff had shocking conditions to contend with over the past year, so they all deserve credit for running as many meetings as they did. These special efforts made it hard to pick winners, but the awards have gone to groundstaff who show a consistently high level of commitment and high standards. They all deserve trainers' thanks."

Richard Linley, Senior Inspector of Courses at BHA said; "Following an extremely challenging twelve months for groundstaff around the country, those challenges were met head on by the groundstaff and they have provided the best possible racing surface giving scheduled race meetings every chance opportunity of being staged."

On behalf of the sponsors, John Richards of Pitchcare added; "As ever, the judges had an extremely difficult job. I certainly didn't envy their task of selecting just one winner from each category when there were so many excellent submissions. However, when it came to selecting the winner of the Neil Wyatt Lifetime Achievement Award, there was a stand-out candidate in Mark Cornford of Plumpton."