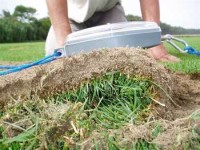 Real Madrid, one of the biggest clubs in the history of world football, is having three new pitches installed by SIS (Support in Sport) Ltd.

The surfaces will be built at the Spanish club's training complex in Madrid, and will be for use by the first team squad exclusively. The complete installation will take only 10 days, using Spalding-based SIS' unique fast-track construction process. They will be finished by the end of August and ready for play next month.

SIS won the contract against stiff competition from other installers based in France, Holland and even Spain itself.

Real Madrid's star players, who include such greats as Zinedine Zidane, Ronaldo and David Beckham, will be immediately at home on the new surface. It has been purpose-grown in neighbouring Portugal, at a satellite turf nursery owned by Sovereign Turf of Suffolk.

SIS teamed up with Sovereign earlier this year to grow turf in Portugal and the UK using carefully chosen soils and grasses that are ideally matched to the indigenous conditions at client clubs throughout Europe.

The turf will be carefully harvested and transported to the Spanish capital in 60 refrigerated lorries. SIS specialists will then install the three pitches, having ensured that the sub-base is free-draining and level using the latest machinery and techniques.

SIS staff ensure that the new turf is kept immaculate throughout the installation. The rolls of turf are moved carefully into place one at a time on the prepared soil surface so that no damage occurs to the edge or to the turf itself. Then, other specialist machinery is brought into action which knits together the new sward so the join lines disappear.

George Mullan. Chief Executive Officer of SIS UK Ltd, is delighted to have won this prestigious contract. "Top clubs appreciate our ability not just to design and build turf surfaces of the highest possible quality, but also our skill in achieving this in the shortest possible time scale. This minimises disruption and means that important revenue-earning events can be staged almost immediately. "

"We have successfully undertaken similar fast-track construction projects at Old Trafford, Hampden Park, the Millennium Stadium and at the Delle Alpi Stadium in Turin."

"Our partnership with Sovereign Turf means that we can be sure of the quality of the new playing surfaces, so that it exactly meets the client's requirements. At the start of September, Real Madrid's top stars will be able to train on three truly world class surfaces."