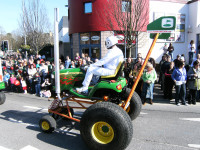 For sale, heavily modified John DeereX740 lawn tractor, capable of speeds up to 40mph, one very careful owner (any resemblance to The Stig is entirely coincidental), used once, just 1.2 hours on the clock… open to offers!

Star of the show at this year's St Patrick's Day parade in Killarney was undoubtedly this one-off conversion, the brainchild of Padraig Weldon from John Deere's southern Irish dealer Seamus Weldon Groundcare Machinery.

"We were trying to think of something a bit quirky to promote the dealership and catch the public's imagination during the parade, and this is what we came up with," says Padraig.

"It was quite a quick job in the end - we removed the wheels from one of our demonstration machines, built a new sub-frame, put some flotation tyres from a 3520 compact tractor on the back, and dropped the front axle onto the frame, complete with power steering, plus a new exhaust and a rear spoiler with our website address, www.seamusweldon.com.

It was pretty noisy, the engine sounded more like a low flying aircraft than a lawn tractor, but it had the desired effect - and all the kids in the crowd recognised the driver!"

Look out for the John Deere monster mower clips on YouTube - and turn up the volume to get the full effect of the V8 style engine.