A Reaseheath College senior sports turf lecturer has hit out at the Leader of the Conservative Party, Michael Howard, after he criticised high level industry training.

Gareth Phillips slammed remarks from the Tory MP, who said that students would be better learning their skills out on the golf course rather than studying for an academic degree in golf course management.

Speaking live on national radio, Gareth said: "Michael Howard's comments are grossly out of place. He has lost contact with what is going on in the sports turf industry. It's obvious that he doesn't appreciate what it takes to look after and manage sports turf pitches to the highest level."

Gareth pressed his point home by inviting the opposition leader to spend a day on Reaseheath's golf course alongside students who are learning greens management and maintenance.

He told BBC Radio Five Live: "If Michael Howard is so out of touch with our industry, he should come and see for himself what skills are required."

Speaking from the UK's premium turf management exhibition in Harrogate, where he was interviewing potential students, Gareth explained that the sports turf industry demanded staff who could show a balance between practical skills and theoretical knowledge. The theory covered subjects like soil science and the business skills required to run a commercial sports facility. This balance was a must for the management of top quality sports surfaces up to Olympic level.

He emphasised that Reaseheath sports turf students had an excellent record of gaining jobs at major venues in both the UK and abroad. Because their skills were transferable, these could include top rugby and football pitches where the facilities would be enjoyed by millions of people and appreciated by international players.

Gareth also stressed that universities and colleges played a vital role in research to improve the quality and safety of pitches.

Reaseheath's Principal Meredydd David, defended the college's reputation as a one of the UK's top training centres, saying: "We make every effort to work in partnership with the sports turf industry, ensuring that employees have the skills and legal qualifications required in the workplace. Sporting professionals and leisure golfers have high expectations - they expect quality facilities both on and off the golf course - and it is up to our students to maintain these high standards. It is also important to remember that the current government, supported by universities and colleges, is trying to make higher education accessible to more students and to increase the number of vocationally relevant qualifications. The high percentage of graduates who achieve these qualifications and go on to gain jobs in their chosen industry is a reflection of the relevance and quality of these courses."

Reaseheath College offers a wide range of sports turf courses including a foundation degree in golf course management. The college is approved as a centre of excellence by the Greenkeepers Training Committee and is endorsed by the Institute of Groundsmanship. It has a commercial golf course and football, rugby, cricket and crown green bowling pitches. Crewe Alexandra Football Club's Soccer School of Excellence is also on campus.

* Michael Howard made his remarks while being interviewed on Tuesday by Jeremy Vine for his BBC Radio 2 chat show.

Reaseheath College, Cheshire's leading training centre for greenkeeping and sportsturf, has appointed Gareth Phillips as its senior lecturer in sportsturf. 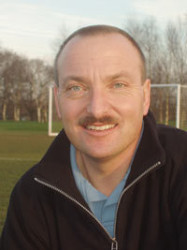 Gareth, who took up his new job in January, moves from the Welsh College of Horticulture, where he had spent four years as a sportsturf lecturer. Previously he was Head Groundsman on a sports ground in Biddeford, North Devon.

A trainer and assessor for the Institute of Groundsmanship (IOG), Gareth holds the association's top award - the National Diploma in Turf Culture. He is an advisor for the England and Wales Cricket Board and takes a leading role in the North Wales Cricket Groundsman's Forum. He is also heavily involved with the Welsh Crown Green Bowling Association as a trainer and advisor.

A married man with two children, he enjoys curling in his spare time.

Speaking of his recent promotion, Gareth said: "I am determined to ensure Reaseheath continues to deliver high quality training and to further strengthen links with the local sportsturf industry. I am also looking forward to taking an active role in helping to run the college's very successful sports turf machinery show."

Reaseheath works in collaboration with the GTC, BIGGA and the IOG to offer courses which are constructed to meet the differing requirements of students. These range from school-leavers and mature career changers to employees keen for further training.

As well as offering full-time courses, the college works alongside its industry partners to provide part-time vocational training in flexible programmes of day release, block release and work-based learning.

Reaseheath's sports facilities include a nine hole commercial golf course, football and cricket pitches and a bowling green. Crewe Alexandra FC's training grounds are also on-site, and these can be used for specialist training.