Now into its fourth year the Reaseheath Show goes from strength to strength with around 65 exhibitors turning up for this year's show. Despite being blessed with glorious sunny, dry weather and superb facilities there was a slightly disappointing turnout of Groundsmen and Greenkeepers visiting on the day.

This, however, should not overshadow the fact that over 600 signed in through the gates-a record number for the show, in fact a 40% increase on last year's attendance figures.

Although some of the exhibitors were concerned by the lack of people attending those who had bothered to make the journey to the college were showing good interest in purchasing or arranging a follow up appointment with manufacturers.
The lay out of the show was different this year, providing a central arena as well as exhibitors spread out across the tees, fairways and greens of the nine hole golf course.

For those who did support the show there was plenty to see. This year a full programme of demonstrations was carried out in the central arena with the ever youthful Martyn Jones given the task of being Master of Ceremonies. A great choice as Martyn is a natural on the mic, he soon attracted an interested audience with his general banter and expert turfgrass knowledge.

All three machines were put through their paces with the operators describing how each machine worked and the benefits from their mode of action. This was followed up with further demonstrations that included the Groundsman tractor mounted hollow corer and core collector expertly demonstrated by Dave Meharg.

Other new features at the show included the Dennis bowling green seminar, during which David Bracey, Head Groundsman from the Met Police, demonstrated several hand tools and the Dennis cassette systems while discussing the merits of annual maintenance. Listening in, I learned a few new techniques and practices that can be used to promote better management of bowling greens.

Despite the late marketing of the show, the organisers promised a bigger and better show than last year, and they certainly delivered. Many of the leading turf grass manufacturers were there - Fleet Line Markers, Toro, British Seed Houses, Campey, Dennis, SISIS, Sherriff Amenity, Lloyds of Letchworth, Ecosolve, Hunter Grinders and Waste to Water to name a few.

What I like about the show is its informality and the fact that many of the exhibitors have plenty of time to demonstrate their machines and talk to the customers. 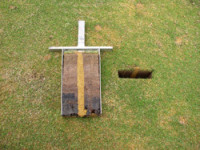 This was the case when I met up with Keith Kensett from Graden and Nigel Berry from Ecosolve who had agreed to run their machines together on one of the greens.

The Ecosolve drill and fill machine is a deep drill aerator that effectively drills and fills soil profiles, with a choice of soil amendments, such as sand, rootzone material or zeolite products such as Sportslite. The 20mm diameter drills are spaced at 150mm centres and can penetrate to 320mm in depth. A typical 500m2 golf green can be treated, applying 2 tonnes of materia,l and completed in two and half hours.

The objectives of the operation is to relieve deep seated compaction problems and improve porosity of soil profiles. In fact, using an 80/20 mix of D30 grade sand and Sportslite increases hydraulic conductivity of the drilled areas by up to 965mm per hour.

Further benefits can be achieved once the drill and fill operation has been completed by running over the green with the Graden Contour Sand Injector, which is a modified Graden scarifier fitted with a sand injection system.

This enables you to remove unwanted thatch and replace with approved soil amendments. The machine has seventeen 3mm wide blades set at 30mm centres and can penetrate up to a depth of 50mm. The machine will inject about 2.5 tonnes of infill material on a 500m2 size green.

Those that were at the show were able to witness the effectiveness of a powered brush that was originally designed to sweep snow. It is basically a strimmer with rubber paddle blades attached. Watching it remove surface debris, reminded me of the hard work I used to endure brushing up debris and cores from grass surfaces. I'm sure it will become a favourite piece of kit for many greenkeepers and groundsmen in the future.

On the mower front there was plenty to see both in the ride on and pedestrian models. There was some keen competition between Dennis, Lloyds and Protea Mowers as well as TORO who all had stands at the show. Also on display were the MAS Mowers, three fully automated GPS guided robotic mowers. The McMurtry brothers have worked hard to produce a new diesel engine powered rotary machine that is easily set up and runs very cost effectively without an operator.

As usual Fleet Line Markers were in attendance showing off a wonderful range of equipment as well as demonstrating the new laser controlled Beamrider Line marking system that can mark the perfect straight line with no strings attached. Iain Courage, Area Sales Manager, was enthusiastic about the show as it enables him to meet potential new customers.

Richard Campey from Campey Turfcare and Gary Mumby from BLEC, ardent supporters of the show were, as ever, present showing off their latest products.


Reaseheath College's aim when developing this show was to enable their students to see at first hand many of the industry's products and materials and, in particular, machines being demonstrated. Additionally, it was intended to meet a demand from turf professionals for a trade show in this region of the country.

Although attendance was up on previous years, the organisers need to work closely with exhibitors to ensure a bigger turnout. Like all things new it will take time to build up a reputation. However, most of the exhibitors agreed that the format, cost, timing and the wonderful site and its facilities are good. Better advertising of the show to attract potential new customers will be the way forward.

Most of the exhibitors expressed interest in supporting another Reaseheath show next year and would play a greater part in promoting the show to attract additional visitors.