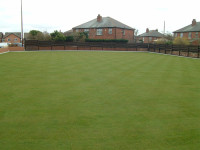 he last day of March sees the grand opening of an unusual rectangular crown bowling green at a West Yorkshire Cricket Club.

Hanging Heaton Cricket Club in Dewsbury, who received planning permission for the green four years ago, has already entered 13 bowls teams in four different leagues for this first year and had a healthy waiting list before the last turf was laid. "We're a Crown Green Bowling area," explains President and Chairman Mel Dearden. "We had this piece of land on the club premises and although our planning application was granted four years ago, we'd been too busy upgrading the cricket facilities - building a new digital score box for example, to do anything with it."

In 2005, the club was approached by the Dewsbury East Area Committee of Kirklees Met. Council. Funds were available for a sporting facility and they were looking for a suitable project in the area. The money was granted, and work started in September at the end of the cricket season.

"This is the fifth Crown Green the council has actually constructed in the last 15 years," says Mick Wilby," Landscape and Development Manager for Culture and Leisure Services.. "The site dictated the size, and at 40 metres by 28 metres it's probably the only rectangular crown bowling green in existence. We specified a high soil/sand root zone 60/40 mix, which was supplied by Gem Professional."

Lindum supplied 1,100 square metres of their Rootzone Greens Turf, the first time that it has been used for a bowls, rather than a golf green. "As this turf is always grown in a U.S.G.A spec root zone, it was very compatible," says MD Stephen Fell.
"We also sent our own laying team." 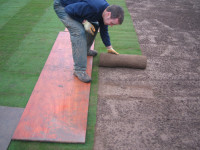 Two weeks before the opening Mel reported that the green was looking better and better. "The turf is unbelievable, it looks like a carpet," he said. "We're starting off with a temporary bowls pavilion this year, but we've plans for a proper brick built structure in the future. The Bowling Club, which is at present under the umbrella of the Cricket Club, has been my baby from day one. I've bowled for 30 years."

For further information on Lindum's Rootzone Greens Turf, contact the company on Tel: 01904 448675 or visit their website at www.turf.co.uk