0 Red turf - whatever next? 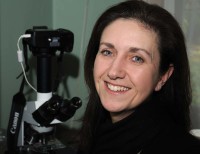 During the late spring and autumn months, patches of red/purple discolouration can develop on close mown turf, and the cause is often automatically regarded as being fungal.

However, in many cases, the reddening of the leaf is nothing to do with fungal activity but the cause is a natural phenomenon that will not result in any lasting damage to the turf. There certainly are fungi that can cause a reddening to turfgrass plants during the same times of the year and the aim of this article is to identify the causes of these two problems and also to mention a third potential cause for this observed turf discolouration.

In 1999, Dr Peter Dernoeden wrote an article in Turfax that explained two of the common causes for why turfgrasses develop red/purple discolouration, and I will pick up on some of his comments here. His article is readily accessible and well worth a read, especially if you manage turf that routinely shows this patchy discolouration.

Although this discolouration of the turf often appears as distinct, disease-like patches across the sward, I believe that the most common cause for the symptom is a natural development within the plant. To explain what is happening, we need to look at the process of photosynthesis and what happens to the sugars that are produced by this process.

During the spring months, as day-time temperatures and light levels increase, turfgrass plants start to increase their rate of photosynthesis. The result of photosynthesis is the production of carbohydrates or sugars (photosynthates) within the leaf that will ultimately be used in other physiological processes throughout the plant. During the normal course of events, these sugars that are produced during the day-time will be translocated out of the leaf and into the crown or root tissues during the night, where they will be stored or used as necessary within the plant.

However, as with all physiological processes, the rate of this translocation is affected by temperature and, as temperatures fall, the rate of movement is reduced. If night-time temperatures are low, anything from about 7OC and below, the translocation of these photosynthates will be significantly reduced, and this will lead to their accumulation within the leaf. These photosynthates/sugars are often quite naturally bound to other molecules within the plant, producing what we refer to as 'anthocyanins'. 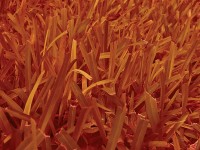 There are various anthocyanins within the cells of plants and their colour and quantity will vary depending on the plant and the ambient environmental conditions. These anthocyanins are quite naturally found in healthy plants but their presence is often masked by the overwhelming presence of chlorophyll which makes the grass appear green. As the photosynthates accumulate in the leaf under cool night-time temperatures the leaf colour will change from green, through purple to red.

However, if this foliar discolouration is a natural event (caused by the accumulation of anthocyanins within the leaf that have been produced during day-time photosynthesis but not translocated out of the leaf due to cool evening temperatures), why would all plants in the sward not become equally affected and the entire turf turn red?

The plant is a complicated set of physiological processes and different plant species will naturally react differently to any given set of environmental conditions. It is a fact that, for example, in a close-mown Agrostis - Poa annua sward, all grasses will experience an effect on photosynthesis during warm, bright day-time conditions and cool nights but that some grasses will be affected to a greater extent than others.

Certain cultivars of a given grass type will show a more extreme reaction, producing greater amounts of anthocyanins or being able to translocate less as temperatures fall. Established turf will naturally segregate in to areas dominated by different species or clones of a grass type and this segregation may not be apparent when the plants are not under physiological stress. However, their differing response to ambient conditions can show up as a patchy discoloured sward.

Since this accumulation of the anthocyanins in the leaf is a normal process, the effect will be reduced as night-time temperatures start to increase. There is no need for any product application to manage the symptoms, nature will do that, and without any lasting detriment to the health of the plant.

However, as I mentioned at the beginning of the article, there is also a potential fungal cause for the reddening of turfgrasses during the spring and autumn months and it is important to be able to distinguish between these problems.

The fungal disease that causes similar red/purple discolouration to the turf will only affect bentgrasses and so, if the discolouration is seen on Poa annua, you should be alerted to the fact that it is more likely to be a physiological problem. The fungus responsible for bentgrass reddening is Drechslera erythrospila and the disease is given the descriptive common name of Red Leaf Spot.

Close inspection of the affected leaf tissues will show the presence of distinct red spots on the leaf blade. They may have a paler centre and a red/purple border but, in cases where the disease is very active, the extent of the foliar infection can make the whole leaf appear dark red/purple.
Again, different cultivars will show a range of susceptibility to this disease and the affected turf can appear quite patchy or show as a general discolouration, particularly on younger swards. The fungal genus, Drechslera, contains several species that have the potential to cause leaf spot diseases and other problems on all turfgrasses. Historically, the fungi that are now called Drechslera, used to be associated with other fungi in a group referred to as 'Helminthosporium' and some text books may still use this old nomenclature.

The Drechslera species of fungi respond very quickly to the wetting of a dry turf and, following rainfall or irrigation, the fungi will rapidly produce spores, penetrate the leaf and initiate new area of infection. Therefore, the foliar discolouration caused by this fungus on bentgrass turf will develop rapidly under conditions of heavy dew following daytime temperatures that rapidly dry the sward. Typical symptoms on bentgrass turf can be seen in Figure 2.

So, the observed patchy red/purple discolouration of turf that develops in the spring or autumn may be caused either by a natural physiological process within the plant or by the fungal disease of Red Leaf Spot on bentgrass plants. Could there be any other reason for the discoloration?
Well, generally, the thinking is no - but I have seen enough turf samples over the years to have noticed another potential cause for foliar discolouration, and the culprit is quite an unlikely one.

Generally, on bentgrass turf (and frequently on creeping bent) during the spring months when we experience heavy dews or at times during the year when the sward may remain wet for extended periods, I have often seen one particular fungus within the leaf tissues in parts of the lamina that are showing a red discolouration.

The fungus is Sclerophthora macrospora and you may know this as the cause of the disease Downy Mildew or Yellow Tuft (a more descriptive common name). The fungus is what's called an obligate parasite which means that, like the rust fungi, it will only live on a living host and will not cause death of the plant like, for example, Microdochium nivale will.

Once the plant is infected, the fungus S. macrospora will remain within the plant and increase activity and symptom development whenever the turf sits wet. Under extreme conditions, the fungus stimulates increased tillering of infected plants, causing a tufted appearance to the sward which becomes yellow or chlorotic due to the plant's inability to take up sufficient nutrient to maintain colour in the quantity of leaf tissue that develops.

The root development is also reduced in affected plants, further increasing the severity of chlorosis. However, the fungus can be found inside leaf tissues of plants that are not showing typical Yellow Tuft symptoms. In these cases, the affected leaves may be tan in colour from the tip down or they may show small areas of red pigmentation along the lamina.

When viewed under the microscope, the large oospores of the fungus are readily apparent within the leaf tissue and, although they resemble the oospores of Pythium in general appearance, their overall size confirms their identity. Figure 3 shows a bentgrass turf that has Sclerophthora macrospora in the leaf but is not showing typical symptoms of Yellow Tuft. 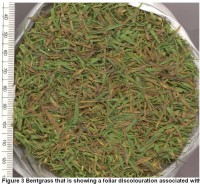 How frequently is this infection being overlooked, considered to be purely an effect of the prevailing weather conditions or identified as Red Leaf Spot? When the quantity of the S. macrospora in the leaf is high, the red pigmentation that develops in the plant cells can closely resemble a Drechslera infection. What we don't see however, is the pale centre to the leaf spot and the darker circle of pigmentation that characterises Red Leaf Spot disease.
Physiological colour changes due to ambient weather conditions require no plant protection product application. The turf will recover as soon as the night-time temperatures begin to increase. Red Leaf Spot disease may grow out untreated with fungicides but, if the disease is considered to be active and extensive and the weather likely to remain favourable for infection, an application of a suitable fungicide may be appropriate.

As for the fungus S. macrospora, it is generally considered unnecessary to apply any fungicide to manage these infections, but increasing surface drainage is generally all that is required to reduce the expression of any symptoms. As always, identification of the cause of the symptoms is crucial for effective management.