by Louise Prettyman
in Machinery & Mechanics
on 11 May 2016

Knotty Hill Golf Centre was founded 24 years ago as a driving range - today it spans 560 acres and comprises three 18 hole courses and 27 holes of football golf! Built by Denis Craggs, the complex is overseen by his son Ashley Craggs, as Proprietor and Head Greenkeeper, and his team of five full time staff 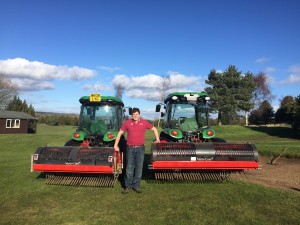 With so much acreage to cover, Ashley and the team need their maintenance equipment to be 'quick and easy'. So when looking at aeration three years ago, Ashley purchased a Redexim Verti-Core 1600 from Dougie Archibald at Charterhouse Turf Machinery. "We first came across the Verti-Core at a trade show, and again during a demonstration at another club. We were instantly impressed by how light it was, how easy it was to get it on and off the back of a tractor and it's all round ease of use" says Ashley. "It ticked all the boxes for us so we purchased one, and shortly after purchased a second larger model."

The whole centre is closed once a week for Ashley and the team to conduct maintenance across all the courses - carrying out aeration of the greens once a month. "The lads will go out with the two Verti-Cores and will spike all 54 greens in a day. The guys love them because compared to a lot of the machines on the market they're simple to operate - put them on the tractor and off you go; quick, easy and very fast! The Verti-Cores have delivered fantastic results, our greens have really picked up and are now some of the best in the area."

At around the same time, Ashley also purchased two pedestrian Core Collector 3001HL's. "After you've done the job, you don't want to be driving on the greens with a heavy tractor so these pedestrian models really appealed to us. They're nice and light, and with only five men, it saves them shovelling the cores off 54 greens manually!"