Robust construction, combined with simple adjustments, make the Redexim Verti-Core™ from Charterhouse Turf Machinery reliable and easy to use. It is a highly productive and low maintenance turf aerator with fewer moving parts to ensure simple service and less maintenance. The tines penetrate the soil perfectly vertical allowing the machine to operate at high speeds. 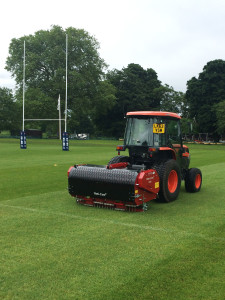 It's a machine that Steve Tingley, owner of Championship Sports Surfaces, knows a lot about. "I first saw the machine at Stoke Park and spoke to the Head Greenkeeper, Alex Miller, about it. I had something else in mind at that time, but once I'd seen the Verti-Core™ it became my preferred machine. It is one of those things - you see it and it clicks straight away. I have been very pleased with it and become quite attached to it."

Steve bought the company in 2006 and specialises in the design, construction and maintenance of natural grass sports surfaces and high profile quality turf areas. In the last five years CSS have constructed more than 20 championship grass tennis courts, with more recently eight grass courts for the National Tennis Centre in Roehampton. Before that, Steve did a stint at Wembley having left in 1995.

"I've bought the Verti-Core™ from my local dealer George Browns in June 2014," says Steve "when two new contracts warranted its purchase. At The Lensbury Club in Teddington we do finishing work on the Rugby pitch and at the London Irish Rugby Club we perform maintenance on their training facilities. Only one member of my team goes with the Verti-Core™ to do the job as it only has to sit on the back of a tractor. You can barely hear it behind you as it makes no noise. Although I do have a Verti-Drain™ 7516 the Verti-Core™ works in a different way that makes it quicker. The speed is due to the piston action being so quick because of the way it is geared; the gearing allows it to go a lot faster as it does not go so deep. We can complete a rugby pitch in two and a half hours which makes for a massive saving in labour and makes us more competitive. After usage the surface of the pitch looks untouched, a little perforated perhaps, but you can play on it straight away."

The Redexim Verti-Core™ is one of the fastest aerators on the market, with working speeds up to 3.5 mph to save time and money. Special core deflectors keep the cores away from the machine and the support arms enable the Verti-Core to work in extremely tough conditions. A wide variety of tines are available.