The University of Leeds can boast the most extensive playing fields in UK Higher Education, covering a total of 120 acres at SportsPark Weetwood. The main football and rugby pitches host over 100 fixtures a year with non-stop cricket during the summer and all of this is maintained by 5 full time staff led by Chargehand, James Wright 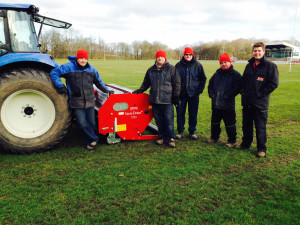 "It's been a weird year this year," says James, "the grass isn't growing as it should be which is creating new challenges. I estimate everything is about 20 days behind which adds additional pressure when you've got to get pitches ready for matches in a set time frame and there's no grass growing!"

His maintenance regime includes mowing, Verti-Quaking, Verti-Draining, topdressing, and seeding - Verti-Draining is carried out 2-3 times a year on the standard pitches and 6-7 times a year for the higher profile surfaces. The Redexim Verti-Quake was purchased from Charterhouse Turf Machinery in July 2014 and the Redexim Verti-Drain 7521 in January 2015. They now try to do a lot of the jobs in house that were previously carried out by an external contractor. So far both pieces of kit have proven to be a god send as James has found it beneficial to have the tools in the shed rather than finding the budget to employ contractors. Before they had them they would only generally Verti-Drain once a year, but some pitches have already been Verti-Drained three to four times since the beginning of the year. James is confident this will result in better surface quality and will more than justify the expenditure.

The purchase of the Verti-Drain was purely based on the spec - James having done a lot of research including speaking to some contractors to get opinions on what they would use. "It's bulletproof!" he says, "and the service from Charterhouse was really good. Especially Dougie Archibald who came to do the demo and provided the back-up ever since".

The Verti-Quake is used for the in-season aeration of the pitches, normally from October through to March time, but James hasn't managed to use it a great deal so far this year because of the ground conditions.