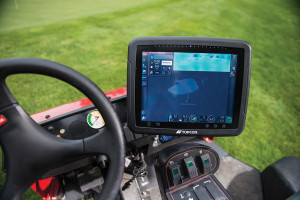 Complete with touchscreen and steering wheel, the simulator will allow stand visitors to realistically demonstrate and experience application rates, coverage maps, area and volume data, that the industry's first turf-based precision spray system is designed for.

Available for use with the Toro Multi Pro 5800 and 1750, GPS technology and a single nozzle level control means application is accurate to within 10mm. Neil Adams, training manager at Reesink Turfcare, says: "The simulator provides a realistic operational experience of this fantastic technology. The level of accuracy is something that needs to be seen to be believed and by bringing the simulator to BTME we are giving visitors to the show that opportunity."

The simulator will be joined on the Reesink stand by a selection of Toro machinery favourites and latest launches, including the Reelmaster 3575-D, which launched in 2016, and the Workman GTX, which debuted at BTME 2016. The ever-popular greens mower TriFlex 3420 and the electric eFlex 2100 pedestrian mower will also be there as will the Groundsmaster 4500-D and the RM3575-D's stablemate, the Reelmaster 5010-H.

Representing Toro's irrigation range will be the new Stealth Kit, Lynx PC control system, the Flex series sprinkler and the B series sprinkler. Stealth, the latest addition to the ever-popular Infinity series golf sprinkler, with its innovative patent-pending design allows grass to grow directly on top of the sprinkler and eliminates not only turf disruption and damage, but the hard surface bounce should a golf ball land above it.

Robert Jackson, Reesink's irrigation manager, says: "By allowing turf growth on top of the sprinkler Toro has created a situation where irrigating the turf does not affect the cutting process. A seamless and continuous area for cutting is created and this is music for all turfcare professional's ears. The fact that the sprinkler includes the benefit of Smart Access technology, allowing for easy access to all adjustments and other internal components, is another big advantage."

Holly Jones marketing manager at Reesink Turfcare, says: "It will be a busy stand as usual and we're looking forward to welcoming turf professionals to join us in Hall M where we'll be ready to advise on products both new and well-known."