0 Regal treatment for the Dukes

Regal treatment for the Dukes 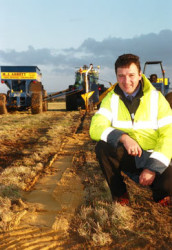 Constructed In 1995, The Dukes Course, St Andrews, is currently undergoing a massive multi-million pound redevelopment programme with works being carried out by leading contractor MJ Abbott.

"One of our key objectives is to improve golfer enjoyment at all levels," says Steve Friedlander, Group Director of Golf for the Kohler Company.
"Lengthening the course in several areas allows for longer hitters to be challenged and makes the course more attractive to hosting championship events."

Five tees are being introduced on every hole, so any skill level of golfer will be able to enjoy the Dukes course based on their personal desires to be challenged or even simply to enjoy a friendly fourball."Forward tees give players with more modest ability the opportunity to take pleasure in the golf course without feeling as though the Duke's is too difficult for their ability," he says. "Players can be challenged as much as they would like to be challenged."

The Kohler Company is an American manufacturing company, with a world-renown Hospitality Group that includes the Straits Course at Whistling Straits, the host site of the 2004 PGA Championship won by Vigay Singh. Since buying this Scottish golf course in November last year the company is making sure the course takes full advantage of the natural views and spectacular surroundings.

"Modifications and improvements are being made which add to the Peter Thomson design of the golf course," says Steve
"Tim Liddy, a US golf course architect, is leading the club with this project, which includes re-routing and adapting the last four holes to fit the natural topography of the land and account for the movement of spectators through these final holes."

MJ Abbott started work in March this year and will continue until May 2006. "Drainage has been extended and improved to ensure the Dukes is playable 365 days a year," says Steve. "A buggy can now be used in any weather conditions as a cart course has been constructed around the entire golf course."

Water is fed from a borehole and an internal reservoir, fed by the borehole, can also be tapped into.Greens, tees and fairways are to be covered - which will eventually involve MJ Abbott in the fitting of more than 1,000 sprinklers - and a weather station is also to be installed along with a new pump station.

Funds are also being spent on making the golf course capable of hosting championship golf events. "This means it is vital to look at the infrastructure including corporate hospitality, spectator grandstands, concession stands and placement of TV towers," Steve says."We are allowing for spectator movement to enable us to attract a championship golf event in the future."

Picture : Nigel Wyatt, Contracts Director at MJ Abbott, is delighted that the company was selected to work on this major redevelopment project at The Dukes.