A shake-up of flat racing's premier fixtures has given Ascot the new British Champions Day to add to the season on 15th October, requiring the delivery of the highest standard of racing surface for some of the sport's most valuable animals. Meanwhile, the dramatic redevelopments to the course, completed in 2006, continue to bed in, demanding ongoing fine tuning of the management regime.

During the £220m redevelopment, The Straight Mile flat course was completely rebuilt, moved forty-two metres to the north and its road crossing replaced with an underpass. Stripped back to the sub-base, the track had drainage and irrigation systems installed before a gravel carpet and blinding layer was added. Topsoil, blended 50:50 with Kingsley sand, was then turfed with big roll turf.

The National Hunt course was also partially reconstructed, using straight topsoil for the top 200mm and seeded with a rye, fescue and meadow grass mix. Other works included building a new main stand, repositioning the Parade Ring and refurbishment of the remaining chase course.

Over the past five years, the Ascot grounds team have striven to encourage greater rooting depth that will produce increased 'give' in the surface and create racing conditions closer to those on the old course. 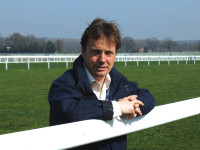 Regular decompaction with a pair of Charterhouse Verti-Drain 7526 linear aerators has been crucial to this, as Clerk of the Course Chris Stickels explains: "We verti-drain the new course four times a year, working at varying depths from 200 to 250mm, to break up compaction and encourage root growth whereas, on the old course, it is only done once a year. It has made a significant difference," he says.

"On the National Hunt track, the depth of the topsoil varied intially and compaction was an issue, along with water lying on the top, but the verti-draining programme has resolved this."

Head Groundsman, Gilly Gilford, comments that the verti-drain scores over other machines for the amount of heave that it produces, and the flexibility offered by the ability to use a range of tines.

He adds that the latest machines are also much quicker than in the past, with two verti-drains covering eight hectares in two and a half days.

It has also contributed to the success of a new topdressing regime, fitted with hollow tines to mix in the 10mm of Mansfield Sand organic mix that has been applied annually to the jumps course for the past three years. 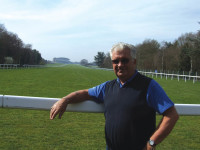 "This has improved turf growth and water retention on the National Hunt course, which is a gritty, grainy material from the old topsoil and needed the body that the organic matter has added," explains Chris.

While the 'turf bridge' over the Winkfield Road is eye-catching to the motorist, it seems that horses and jockeys do not notice it.

"It's an identical profile, so has an identical feel," comments Gilly. "But, it is much easier for us to handle than a road crossing, and better for the horses."

The grass cutting regime has also seen change, with a shift from the use of cylinders to Toro Groundsmaster 580 and 590 ride-on rotary triples.

"They are quicker and easier to move about than a tractor mounted mower, and the latest models offer a much improved cut and presentation, standing the sward up," 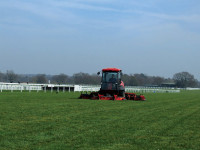 says Gilly. "However, we do still use a Lloyds gang mower in the wet, as it gives an even spread of cuttings and avoids clumping. The ride-ons are also heavy and risk marking in wet conditions."

Rainbird pop-up irrigators, sited under the running rail, take care of much of the watering on the narrower round course, but Ascot has gone back to Briggs boom irrigators for the wider straight course.

"Accuracy and effectiveness is an issue with pop-ups, so we have had to re-address the irrigation system," says Chris.

Water is harvested from the building roofs and underpasses and pumped to a new reservoir as required, using the latest eco-friendly technology to solve the age-old requirement for significant volumes of water on the racecourse.

Fertiliser is currently under review; the nitrogen requirements of the new course are 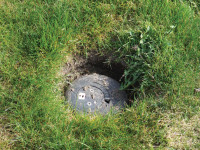 significantly higher than those of the old course and the use of granular compounds does not always deliver the required results.

"We find that nutrients wash through quickly, so we are looking at liquids and controlled release products," says Chris. Gilly adds: "We would like to hold the colour in the turf for longer, especially from July onwards; we seem to get a flush that only lasts for a few weeks. We apply fertiliser regularly throughout the growing season, as long as the conditions are right."

Poa annua is a thorn in the racecourse groundsman's side as much as in any other sport, especially as the opportunity rarely arises for tight mowing to eliminate poa seeding.

Gilly explains that the cuttings are picked up using a Trilo vacuum collector, before the course is raked with an Opico harrow and vacuumed again, pulling up thatch 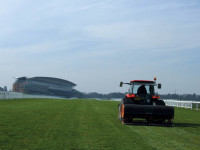 as well as tackling the poa.

"But, techniques such as fraise mowing are not available to us, as we race virtually all year, and we could not guarantee the right conditions for regrowth afterwards," says Chris.

Despite the need to minimise vehicle movements on the turf to avoid further compaction, tractors are crucial to course maintenance. The old Renaults are gradually being replaced with Kubota M108s, shod on low profile tyres to provide sufficient traction along with a gentle tread.

"We need plenty of power for fertiliser application, watering and verti-draining," comments Chris, "Due to the sand based nature of the new course, it needs lots of attention and that means relying on the right machinery."

Firming up on final plans

British Champions Day will add to the demands on the team, not least due to the goal of providing good-firm going in the unpredictable British autumn.

"For flat racing, we do not want the going to be any easier than good and, with the calibre of horses the meeting will attract, good-firm is the ideal," explains Gilly. "We will not be watering the old course in the run up to the meeting; when it is dry the old and new courses are very similar but, in the wet, you can see a big difference in the going."

With no quick fix to improve wet ground - although rain covers are being considered - keeping the surface open throughout the year will be crucial.

"We have seen the benefits on the new course, where standing water used to produce dirt kickback. Now it can get through to the sand layer quickly," says Gilly.

The last raceday before British Champions Day is 1st October, so Gilly and his team will have just two weeks to bring the course back. Moving the running rail and setting out the courses is key.

The courses will be set out wide for the previous meeting and brought back in for the championship fixture, saving the ground for the big day.

In this age of mechanisation, moving the running rail is still a painfully manual process. "I've looked at all sorts of ways to make it easier, including mechanically hammering in the uprights, but we still have to do it by hand," admits Gilly. "We're as efficient as possible - four men can move a mile and a half of rail in three days. We use a rope to mark the new position and it goes in like clockwork - it's a tried and tested method." 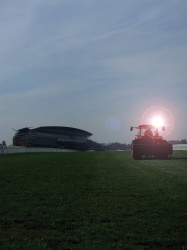 Rail movements are also the biggest job when transitioning from National Hunt to flat meetings in the spring.

"We have two weeks to do it in and, on the round course, the rail has to be reversed from the jumps to flat tracks. I like to repair the ground on the jumps course first, as it can get rough if it is left and then dries out."

Two groundsmen are dedicated to tractor work, using the vertid-drains, while others bring in the hurdles and remove the wings from the steeplechase fences.

"I have seen portable fences in action and would look at them for areas where we have to take the jumps off," comments Gilly. "But, it would require additional tractor movements on the course, which is something we always seek to avoid."

Once the March fertiliser application has been made, the sward is raked and overseeded with a Charterhouse Disc Seeder to replace the poa.

"We have had a lot of success with the Barenbrug mixture as it will germinate at temperatures down to 2.5 deg centigrade," he comments. "It comes up year round after repairing our jump course, which is ideal. We do like to use pure ryegrass as it gives the colour that we are after."

Juggling the groundsmen's workload is an important part of Gilly's job, and he says that 'project work' goes on the back burner at busy times.

The team of twelve full time groundsmen, boosted by seven casuals approaching the Royal meeting, are also responsible for tending the extensive formal and ornamental areas, including the grass verges of the underpass. A mechanic takes care of maintenance and routine servicing in the racecourse's well equipped workshop.

Although the golf club has moved from the centre of the course and is cared for independently, its former site is now under a heath management plan implemented by Gilly.

"We are only allowed to cut it once a year, and are subject to hedgerow restrictions and heather growing regimes. But, it is a natural, attractive area and attracts increasing numbers of birds. The local community has access, and it has proved a very popular move," he explains.

Gilly has been at Ascot for fifteen years, following twenty-nine years at United Racecourses; when he was appointed at Sandown at the age of 21, he was the industry's youngest head groundsman. His own team vary in age and experience, and he comments that the provision of accommodation in the benefits package is a big attraction in a part of the country with sky-high house prices.

Chris Stickels came to the course in June 2005, from his role as Clerk of the Course at Lingfield and Folkestone. While much of the course redevelopment was completed by then, getting it up and running and producing a racing surface worthy of Ascot's world class reputation, with the support of Gilly and his team, has been his responsibility. And, it is one which he has grasped enthusiastically, and continues to do so in the run up to 15th October, when the eyes of the world will once again fall on Ascot, keen to see how it has tackled its latest challenge.