Regular top dressing of fairways is an essential part of the turf maintenance programme laid down by Marcus Weaver, course manager at Machynys Peninsula Golf and Country Club, Llanelli, Carmarthenshire. 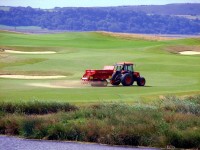 Using a Tycrop MH-400 materials handler/top dresser supplied by Turfmech Machinery, Marcus is applying between 600 and 800 tonnes of sand dressings to the club's 18 fairways between April and October each year.

Spread evenly across the turf by the MH-400's twin spinning discs, the fairway dressings are part of a two to three day operation carried out approximately every six weeks that begins with verti-cutting and ends with matting-in so that no trace of sand remains on the surface when the work has been completed.

The goal, says Marcus, is to build and maintain an open, free-draining soil profile to ensure that golfers have consistently high quality surfaces to play on irrespective of the weather or the time of year.

"The course was laid out on soil that had been seriously compacted over the years by the heavy industry that had occupied the site from the mid-1800s to the final years of the 20th century," explained Marcus. "With the help of the MH-400, we have been able to create and maintain top quality fairways that have helped give Machynys its reputation as one of the best new courses in the UK."

Situated at the heart of the Millennium Coastal Park and commanding spectacular views across Carmarthen Bay and the Gower Peninsula, the 18-hole modern links-style layout is the first Nicklaus-designed course in Wales.

The club had the rare distinction of hosting its first international tournament within two months of it first opening for play in June 2005. That tournament - the S4C Wales Ladies Championship of Europe - has since made Machynys its home, returning to the course in both 2006 and 2007. Marcus pointed out that Machynys had been selected also as the venue in 2007 for the Welsh Open Stroke Play Championship and the R & A's Boys Home Internationals.

"The course and the greenkeeping staff have been under the spotlight virtually non-stop since day one," he said. "I am pleased to say that we have been able to maintain a very high standard of presentation and playability on a course that provides an exciting, yet enjoyable challenge for golfers of all levels. The machines we use play a very important part in that process and the results produced by the MH-400 on the fairways have made it one bit of kit that I would never want to be without."

Machynys MH-400 1: The MH-400 is used throughout the main growing season as part of a regular fairway maintenance and improvement programme that includes verti-cutting and matting-in of the applied dressings.

Machynys MH-400 2: Course manager, Marcus Weaver, says that the MH-400 is one item of machinery that he would never want to be without.