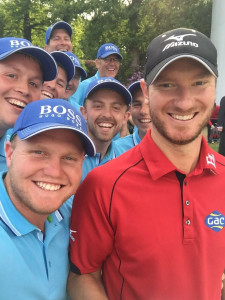 BMW PGA champion 2016 Chris Wood will be flying the flag for greenkeepers everywhere when he sets out to defend his title this week.

Featured on the 29-year-old's bag for the very first time at the BMW PGA Championship will be the logo of the British & International Golf Greenkeepers Association.

The association has around 6,000 members, drawn from every Open Championship rota course right down to the smallest municipal course. BIGGA provides world-class education for its members, helping them to produce better golf courses and contributing to the growth of the game.

World number 64 Wood is a lifelong member at Long Ashton Golf Club in Bristol, and even helped with some greenkeeping duties in his younger days. He credits the hard work of the club's greenkeepers for helping him to develop into a European Tour event winner.

"Playing at the highest levels of golf, we are blessed with some of the finest golfing conditions in the world. Such conditions don't come naturally and are the result of hundreds of hours of hard work by the greenkeeping staff.

"The same is true of every single golf course all over the country, where the nation's greenkeepers put their heart and soul into preparing the course. Everything they do is to make the game more enjoyable for golfers, yet so often their efforts go unrecognised, and that's why I'm proud to be flying the BIGGA flag during the BMW PGA Championship and going forwards.

"I know from my friends at Long Ashton that BIGGA has done so much for them in their career. Having the logo on my bag is a way of highlighting how thankful we golfers are for the hard work of greenkeepers, who provide beautiful and challenging courses that allow us to play at the highest level."

The work of the greenkeepers at The Wentworth Club's West Course will be under close scrutiny during the championship following an extensive renovation, led by Ernie Els Design and put into action by Wentworth's Director of Golf Courses & Grounds Kenny Mackay. All 18 greens were stripped of the old turf and reseeded, while four greens - on the eighth, 11th, 14th and 16th holes - were completely rebuilt. Five other greens were partially rebuilt, while every single bunker was redesigned and constructed, with 29 completely removed from play. 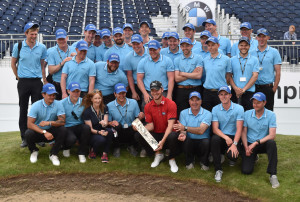 Getting a close look at these bunkers during the tournament will be a support team made up of greenkeepers from all over the country. The European Tour has again requested the assistance of BIGGA in ensuring the course is up to the highest standards for its flagship event, with a team of greenkeepers volunteering to help out.

These BIGGA members will join the resident greenkeeping staff to aid with course preparation, and will also be seen raking bunkers throughout the tournament.

BIGGA Chief Executive Officer Jim Croxton said: "Each year our members are proud to answer the call for help from the European Tour, and they do so out of a love for the game and a desire to support their colleagues at Wentworth. It is fantastic that Chris Wood has chosen to support the nation's greenkeepers by featuring the BIGGA logo on his bag.

"I am certain the West Course will be in incredible condition as always, and I'm sure I speak for every BIGGA member when I say we'll all be cheering on Chris as he defends his title this week."

BIGGA will once again also be providing a support team for the Open Championship, while volunteers help out at other tournaments such as the British Masters supported by Sky Sports and the Evian Championship.