On a stupidly small, swaying plank of wood suspended several metres above Battersea Park, I pause for breath and - if only to avoid the view straight down - take in the splendour of one of London's finest parks. Park funding in the UK may be on a precipice, but from this tiny platform Battersea Park is still an impressive sight. Like many city parks, it was laid out by Victorians as an urban Eden, giving locals respite from the grime, pace and cost of the city. Battersea is a particularly well-equipped park with tennis courts, mini golf, playgrounds, football pitches, boating lakes, sub-tropical gardens and even a small zoo. 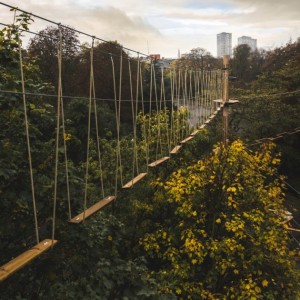 Since December, it's also had Go Ape, a "tree top adventure" course that allows people to wobble around flimsy platforms secured by a harness and, in my case, pray for it all to end. Go Ape launched in 2001, but this is the first course it's opened in a central London park - and it did so amid some controversy. Locals were unhappy at seeing much-needed green space going to a commercial enterprise and wondered why an existing obstacle course (ramshackle, but popular) had been demolished in 2013, shortly before Go Ape signed a deal to take over an abandoned one o'clock club.

We would rather generate income by leasing out the tops of trees than making people on low incomes pay more council tax
Wandsworth council
Anger has since subsided. Go Ape's elevated course is unobtrusive and the area directly beneath contains a new, free public playground, installed by the council. But Go Ape certainly isn't cheap - an hour of defying death costs more than £100 for a family of four - and that expense does run rather contrary to the all-inclusive spirit in which parks were originally founded. Is this really what Victorian philanthropists anticipated when they gave up their land for the good of the common people - the rich enjoying a trip through the trees while everybody else makes do with the swings below?

Wandsworth council, which has pioneered private sector partnerships since the 1980s, mounts a robust defence. "We have a duty to maximise our income wherever we can, and it's expensive to run Battersea Park," says a spokesperson. "We are a low council tax authority and would rather generate income by leasing out the tops of trees than making people on low incomes pay more in council tax. If we can get the private sector to pay for our frontline services we want to exploit those opportunities."

The closure of the old adventure playground was related only in the sense that it was motivated by financial reality - it cost £250,000 a year and could only be opened sporadically, whereas the new playground, which cost £250,000 to install, will be cheap to maintain and open all the time. Go Ape, it says, is for special occasions, saving Londoners a trip to Bracknell or Enfield (where the nearest Go Apes are located), and revenue from the 10-year lease will fund other offerings in the park. For its part, Go Ape is giving 1,000 free tickets a year to local schools while planning its next urban intervention - a course near Alexandra Palace it hopes to open this summer.

More will follow. Our parks are in the midst of a funding crisis which will almost certainly see the commercial world take another step inside our public space. Despite the widely recognised benefits that parks provide - in terms of health and wellbeing, social cohesion and biodiversity, as well as protection against flooding and defence against pollution - there is no national body to protect them and no statutory requirement for councils to pay for them.

Local authorities have subsequently announced huge cuts to park budgets - 50% in Liverpool, and more than 60% in Newcastle. Others seek alternative sources of funding that threaten the integrity of public space, like Go Ape or Winter Wonderland. These range from the mildly irritating - the Chinook helicopter that hovered over my nearest park filming James Bond for several hours in the middle of the night last summer - to the potentially devastating, such as in Bexley, where the council is selling off at least four of its open spaces.

Watching anxiously is the Heritage Lottery Fund (HLF), which has invested £800m funding improvements to parks that councils can no longer maintain. In 2014, the HLF reported that 45% of local authorities were considering selling or transferring ownership of parks and nearly 90% had made cuts to revenue budgets since 2010. It warned "unless future funding is generated in new ways, parks are at serious risk of rapid decline and even being sold off and lost to the public".

Worried that councils would make irreversible short-term decisions, the HLF teamed up with Nesta (National Endowment for Science, Technology and Arts) and the Big Lottery Fund to create the Rethinking Parks programme, which gave 11 local authorities time and money to trial fundraising ideas. These included crowdfunding, forming business improvement districts (BIDs), using jobseekers or volunteers for maintenance and horticulture, and creating charities to run parks.

For example, Hackney built a pop-up, translucent meeting space around a tree in Hoxton Square. Local businesses could hire it for meetings, events or additional office space, and the proceeds paid for park maintenance. One of the simplest and most effective was in Burnley, which reused the woodchips from its tree pruning, replaced bedding plants with perennials and sowed a meadow that required less intensive maintenance. It has saved nearly £68,000, not to mention improving biodiversity.