by Tony Hawkins
in Football, Schools & Colleges, Local Authority, and Rugby
on 21 Oct 2015 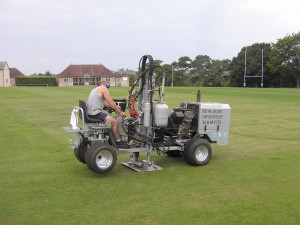 Recent site visits by Terrain Aeration to a number of municipal playing fields provides a good insight into the problems facing many council run sports pitches. One site, which slopes to a small stream, was low lying and frequently waterlogged. On inspection it was found, using bird's eye views, the areas of the field showed multiple use as a cricket and football pitch as well as sprinting lanes marked out, with considerable overlap.

In this case the area of the six yard box, penalty box and the halfway circle, usually heavy wear areas on any soccer pitch, showed little or no grass with the 'turf' consisting almost entirely of broad leaf weeds. These invasive weeds are destroyed very swiftly by play on the pitch, leaving the relatively heavy soil exposed to being churned into mud when conditions are wet.

To restore the turf, drainage needs to be improved followed by destruction of the broad leaf weeds and reseeding with a suitable sports turf grass mix. Removing the weeds presents the additional problem of bare turf which, when it goes dry becomes bone-hard, waterlogged and leads to footballers' skinned knees.

In this type of situation Terrain Aeration's Terralift machine is able to treat the affected areas and only one day would be needed. The machine is very effective in relieving compaction panning and waterlogging to one metre depth due to the dried seaweed injected with the compressed air. It is the only machine which reaches one metre depth and the treatment is effective for at least 5-7 years.

Alan Ferguson of the FA endorses the use of the Terralift to relieve compaction panning and waterlogging on football pitches. 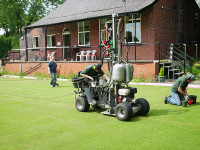 So, how does it work? The Terralift machine uses a JCB road breaker gun to hydraulically hammer the probe 1½" diameter into the soil before it releases a blast of compressed air to fracture and fissure the soil. On the tail end of the air blast, dried milled seaweed is incorporated which sticks to the walls of the fractures and over a period of time, swells and contracts with the moisture content in the soil. This process helps to keep the fractures open. The probe is removed, the machine moves forward and the process repeated using two metre centre spacings on a staggered grid pattern. The probe holes are then backfilled with aggregate to provide a semi long-term aeration/ventilation shaft allowing air and water to percolate into the fissures. Approximately 1kg or 1lt of backfill is required for each hole and the turf will grow back over the hole, once the weeds have been removed and new seed sown.

Further investigation of the site indicated what may be 'crop markings' parallel to the stream above existing drains, the condition of which is unknown. The drains may be functioning but with the soil so compacted above them no surface water can reach them to flow away. The Terralift machine is also able to rectify this type of problem.