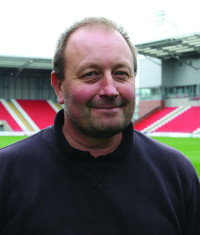 Leigh Sports Village is fast earning a reputation for providing top quality playing surfaces. The village came about from the collaboration of many sponsors, government funding and local planning gains. £83 million was invested in building the village that saw the provision of several sporting facilities on one large site. The development has transformed Leigh into one of the finest hubs of sport activity in the north west. 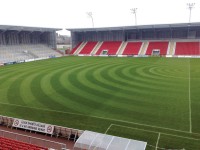 The stadium has an 11,000 capacity, with a state of the art Desso Grandmaster pitch, conference and banqueting facilities and high tech offices. The stadium has already hosted many events, from community fixtures to internationals, as well as being home to both Leigh Centurions Rugby League Club and Blackburn Rovers Reserves.

The pavilion comprises modern facilities, including changing rooms for players and officials, and is also the home of Leigh East ARLFC.

The sports pitches available are one full size rugby pitch and one three quarter size football pitch on 3G synthetic playing surfaces, which can also be divided into five separate courts. All can be hired by individuals and clubs for a whole host of sporting and recreational activities.

Home to Leigh Harriers Amateur Athletics Club, the stadium consists of a 400m, eight lane synthetic running track with a covered sprint area. There is also a club house with changing facilities, as well as field sports and throwing practice areas.

The facility is run and managed by Wigan Borough Council, who appointed local groundsman, Keith Porter, to oversee and manage all the sports facilities. Keith has worked at many top class sporting venues, including Wigan Athletic and Manchester United. It was Keith who instigated the rebuilding of the Old Trafford pitch during his time there, removing the old strathair system back to the grit carpet and rebuilding it with fibresand to the surface structure that is there today. Whilst at both Wigan Athletic and Manchester United, he was out contracting at the weekend, and it was at Man Utd that he built his first pitch on behalf of the club for Trafford Borough Council, with the permission of Leigh Sports Village, assisting and advising on the grow in of the new St Helens Rugby League pitch for and on behalf of Souters Sports, who were the constructors.

Keith also spent three years, along with his son Martin, working for Field GB, a contracting and irrigation company which built and maintained sports pitches. Whilst at Field he built the new pitches on Billesly Common for Moseley RUFC, plus pitches for Altrincham Football Club and Launswood School in Leeds, amongst various others.

So, he brought with him a wealth of experience that helps ensure the facilities at the sports village remain functional and fit for purpose.

"When I first saw the site, I saw challenges all around me," comments Keith. "For instance, I immediately noted that the construction of the Leigh East ARL and Leigh Harriers pitches clearly never matched the specification; they had poor drainage and the surface suffered from a lot of 'debris'. I became excited at the prospect of bringing these - indeed, all the natural turf pitches - up to a high standard. I called on the experience of John Bowie, Site Manager for Souters Sports, and his team, to undertake the works."

Keith has been head groundsman for three years. In that time, he has built up an experienced team of staff - it is quite a family affair, with his sons Martin and Matthew making up the team along with Alan Todd and Malcolm Sargent, who was on the old groundstaff at Leigh's Hilton Park ground.

Both of his sons have qualifications in sportsturf and have spent several years working in the industry - Martin in the roles of Head Greenkeeper, Deputy head and assistant roles for eight years, as well as his time at Field GB, and Matthew as an assistant greenkeeper.

"Like all new facilities, it takes time to get to know the pitches and find out how they perform," says Keith. "However, it was not long before I realised I had some serious sub surface issues with the soil based pitches as, whilst carrying out some aeration work, I found we were bringing up a lot of stone and brick material." After much investigation, it was agreed they needed to do some cultivation work to remove as much debris as they could. "We power harrowed all three pitches, ameliorated them with 900 tonnes of sand and overseeded."

"We carry out the same feeding, aeration and mowing regimes on all the natural grass pitches, although the stadium pitch gets more time spent on it with regard to presentation, for obvious reasons."

"The original stadium pitch was a fibresand construction, but it soon became apparent that it was not performing as it should. It cut up very quickly and, on further inspection, we found there was little rooting taking place. So, in 2009, I persuaded the council to invest in the Desso Grassmaster system, explaining that, as several top premiership clubs now play on it, it has a proven pedigree."

"As soon as the last match was played in 2009, we koroed off the top of the pitch, vertidrained at four inch centres, dressed with 100 tonne of rootzone, graded to relevel, and overseeded. Desso filaments were then sown into the pitch to a depth of 200mm and, within two weeks, the seed was up and beginning to put down new roots that eventually wrapped around the filaments, thereby making the pitch more stable. Mallinsons and Kestrel carried out the work in preparation for the Desso, with the work being overseen by John Hacker of PSD Agronomy.

Regular maintenance of the new Desso pitch is centred around good cultural practices; regular mowing, brushing, scarifying, aeration and feeding. Pedestrian rotary mowers are used to clean up the pitch and keep the sward standing upright. As with most free draining pitches, the application of fertilisers is essential to maintain turf vigour and colour. Concoctions of liquid products from Paul Benson Growing Solutions, and granular products from Everris (Scotts) are used, along with some bio mass sugars and seaweed solutions.

"Carrying out a decent renovation programme is key to the performance of all the grass pitches," says Keith. "With the crossover of sports being played, the timing of the end of season renovations is critical, We do not want all the pitches decommissioned at the same time."

"We usually start with the athletics stadium pitch in mid April to allow it to be handed over for field athletics. It is scarified heavily in several directions, vertidrained,

topdressed with a 100 tonnes of 70/30 rootzone and oversown with Bar 7 grass seed. A similar operation is then carried out on the remaining soil based pitches. These works are carried out by Will Kidd Fine Turf Services."

The Desso pitch is renovated in June. "We bring in contractors, Mallinsons, who have perfected their own way of dealing with the fibres. The pitch is scarified using our own spiral rake and a Wiedenmann Terra Rake. All debris is cleaned up using Trilo vacs. Regular brushing and dragmatting with a rubber dragmat helps keep the Desso fibre's standing up."

The pitch is then vertidrained, topdressed with a light dressing (40 tonnes) of 70/30 rootzone, and oversown with Johnsons Premier pitch grass seed.

Like most groundsmen, one of Keith's biggest bugbears is the amount and intensity of pre-match warm ups. "I spend a lot of time educating visiting coaches and players to respect my pitch by carrying out their warms up in the designated areas. As a team, we try and make everyone aware o

f the issues facing the pitches, whether it be warm-ups and warm-downs or the effects of the weather. We have even gone to the trouble of writing 'advice memos' on various scenarios, from frost to drought; not that drought is much of an issue generally in the north west! We give these out to end users of the facilities, in the hope that they will understand the issues we face."

The pitches have to accommodate various club teams on a weekly basis, catering for both rugby and football matches. To date (early September), Keith and his team have catered for over fifty games on the stadium pitch this year alone, and he's still got four months worth of fixtures to go.

October and November will be particularly busy, with a number of England international rugby league matches being played against Wales and Australia.

With a reputation for high quality pitches now firmly established, and many additional clubs wanting to use the facilities, Keith and his team can be proud of what they

have achieved. Blackburn Rovers Reserves have hosted Everton and Manchester United reserve teams, who have also used the stadium pitch on occasions, and regularly get gates in excess of 3,000 to watch these matches.

The hard work has paid off, with Keith gaining recognition by winning the Rugby League Groundsman of the Year in 2009, beating off stiff competition from Ian Forshaw of Wigan Warriors and last year's winner, Malcolm Taylor of Hull KR.

Keith says that the support of the management, in being allowed to invest in new equipment, has been paramount to his success, and he now has a shed full of equipment that allows him to get on with the job efficiently.

It was clear to see that all the pitches were being maintained to the highest standard and, importantly, being used extensively by the community. Leigh Sports Village has set the standards for other authorities to follow. 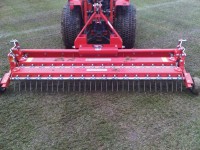