Melbourne is at the bottom end of Australia. Earlier in the year it was voted the world's number one city in which to live based on a whole host of criteria relating to quality of life. It has a reputation of being a city which, weather-wise, can experience all four seasons in one day. Of late, however, the summer season has been the predominant one. 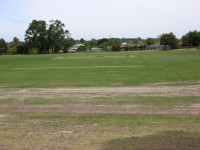 For the last 8 years or so, the state of Victoria has been suffering drought conditions. Water levels in the reservoirs have just climbed back above the 50% mark, very low but still a significant improvement on the 7% levels that were being registered 3 years ago.
It is the middle of December, just the beginning of summer in this part of Australia; temperatures have already been averaging mid 70's F with some days getting well into the 80's; there has not been any significant rainfall for over a week. I was with Rob Savedra, the curator of Wesley College, the largest independent school in the country with 3500 plus pupils, aged from 3 to 18, spread over two campuses. Curator is the term given in Australia to the Head Groundsman, and Rob has been in the post for 13 years taking over at the very young age of 24 after a spell in America where he spent some time working at Jack Nicklaus's Muirfield Village.

Rob is a very active member of the Victoria branch of the Turgrass Association of Australia. He was President for four years and visited the UK in July as part of a 3 man team on a fact finding study of our sports turf management and maintenance practices. An article on their visit appeared in the October/November issue of the Pitchcare magazine. 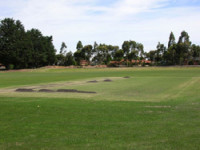 On the morning I visited there was a great deal of activity. The previous Friday the pupils had broken up for Christmas, so it was the perfect opportunity to get on with the maintenance and renovation work. A tree gang were busy lopping, felling and shredding as they went along. All the roads and perimeters of the site are tree lined; some of the work was aesthetic but it was mainly being done from a safety point of view.

Most of the work, however, was taking place on the sports fields. Rob explained, "As soon as the pupils left on Friday the grounds were given a light scarify with the TR50, sucking up all the debris; we then fertilized with a NPK containing a wetting agent, and this week we have spread 200 tonnes of topsoil, approximately 1cm, over the whole of the grounds. It's just a very light renovation."


Rob and his team are responsible for 65 acres of sports field. There are 3 ovals which are used for cricket, Aussie rules and football (soccer as it is known here). The college is renowned for its sports facilities, the venue was used for practice by the World Cricket team (Freddie Flintoff et al) in October before their matches against Australia. The college has produced a regular flow of successful Olympians, football, tennis and swimming stars, not to mention Nobel prize winners and two Australian Prime Ministers!

The sports areas are predominantly couch grasses. "We do have some rye grass," explained Rob, "But we do not oversow with it; it gets stressed out during the summer, but then comes back in the winter. I would describe my main oval area as the perfect transition ground where we have the couch and Kikuyu which stimulate in the summer; these back off in the winter and then the poa seed bank kicks in as soon as the moisture levels increase."

Rob explained that Kikuyu is a species, an alternative to couch, which he uses on the banks surrounding the sports areas, "We don't feed it, we don't water it, and it just ticks along quite nicely."

Mean and lean is the philosophy with Rob's fertilizer programme, "Our main area has a heavy clay base, so the fertilizer doesn't leach away, we use mulching mowers so we retain as much nutrient on the ground as possible. I feed little and often, at probably less than half the recommended rate. Our annual expenditure on fertilizer is around $A10,000 (approx 4,250 sterling), for the whole 65 acres!" 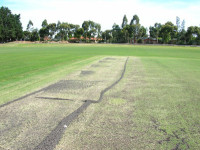 Rob was interrupted by the phone. When he came off he was a little bit agitated. "Sorry about that," he said "I've got a guy booked to come and laser grade my main cricket table. He was due to be here yesterday but didn't make it. I've got my lads putting the topdressing on and around the table, and there's rain forecast for tonight. He's promised to be here this afternoon at 2.30pm, I hope he makes it!"

We went over to where his 2 fulltime staff were stockpiling and spreading the dressing, a black loam called Merri Creek, similar to that used at the Melbourne Cricket Ground. On his visit to the UK Rob was surprised at the comparatively low clay content used in our loams. In Australia, the average clay content is around 80%, compared to around 30% in ours. Rob believes the higher clay content makes it easier for him to prepare his wickets. "It's a luxury you do not have in UK. We can wet our wickets the day before a match if necessary; we can mould it and manipulate it and, even under covers, we know that it is still going to be rock hard. It's the nature of the clay and the confidence we have in the species of grass." 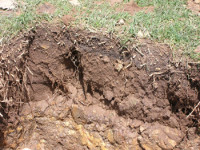 The species of grass in question is Santa Anna couch. "The Santa Anna recovers very quickly," said Rob. "After the match on a Saturday we flood the wicket for a couple of hours, possibly for another hour on the Sunday, the water table is re-filled and we are rolling again by the Tuesday. The table was laid 7 years ago, the root depth is around 300mm so we have a very solid foundation, all we do is work the top as the week goes on. If required, any of the wickets on the main table would last 5 days without a doubt."

All three of the cricket tables, and practice nets were being renovated, the work included scarifying in 6/7 directions using a Graden scarifying reel to get good, even grass cover but with the main aim of exposing the clay. Just one of the tables, on which Aussie Rules football is played during the winter, is overseeded with rye grass and topdressed. The couch grass wickets do not need any overseeding.

In addition to being practical, having a rye wicket table gives Rob and his team the opportunity to gain knowledge about the way the two surfaces differ in terms of rolling time, how they dry and how they wear.

The size of the cracks on the main table had to be seen to be believed, some 10mm across, so wide a pen could easily be inserted. "No worries," 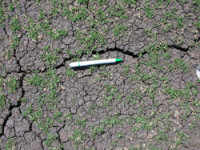 explained Rob, "The Merri Creek clay has a memory, it expands and contracts. This area has been drying out for 3 weeks waiting for the laser level work. Even though cracks are so wide, once we top up the water table we will be able to get it flat and rock hard in no time."

Diseases such as red thread and fusarium are common, and occasionally dollar spot, but fungicide use is virtually unheard of on the site. "I have only used a fungicide once in all the time I've been here. Our main sports area is on the top of a hill with good breezes, so the leaf doesn't stay moist long enough for mycelium to develop. We do, however, have a sand based oval built 13 years ago and sodded with a blue grass ryeblend; this is the area where the fungicide was needed. I spend more on this 1 hectare in time and resources, fertiliser and seed, than I do on the other 6 hectares of playing surfaces put together. Ideally, I would like to take the whole top off with a koro, line plant with couch grass and oversow with rye."

Rob is a firm believer in cultural controls, "I like the grasss to toughen up and let natural progression take over. I much prefer to control by fertilising out and waiting for the good weather. If the grass is susceptible to fungus, it doesn't deserve to be here." 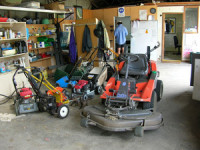 Our final stop on the tour was the machine workshop and Rob's office area. Fertilizers, chemicals and other are kept in a separate store. According to Rob, after the college's prep school and swimming pool, his workshop is the most visited and controlled area as far as health & safety is concerned. There was the expected full range of machinery - a couple of John Deere tractors, a Toro 5500 Fairway mower and Toro 325 Roughcutter, Everyman 24inch Cylinder mowers, Husqvarna Ride On mower, Graden Scarifier and so on. All of the machines are purchased and written off over a number of years. Most of Rob's machinery is less than 5 years old but some are over 10.

The tour of the sports areas took almost 2 hours. In addition to the ovals, Rob and his team maintain a sand based hockey/tennis synthetic area. A lot of the new landscaping works are done in house, however some assistance is brought in for the ongoing maintenance.

Rob is understandably very proud of Wesley College and the sports facilities he maintains with such devotion. It is like a second home to him, which in many ways is not surprising as he spent his schooldays at the college from the age of 13 until he went to the Ohio State University on a scholarship. He's a local boy who has made good, and today's pupils and users of the college's facilities are reaping the benefits.

NB - the contractor scheduled to undertaken the laser leveling of Rob's main cricket table did turn up that afternoon, the dressing was applied in time, and the rain came as predicted. A good result for Rob.