The following points were confirmed during the renovation period:

i, Two passes were made with the Koro Topmaker to remove the offending sand layer in the profile, ii, The small amount of sand not removed during the fraize mowing was dispersed with the OPICO rake. This also had the effect of standing the DESSO up on the surface.

iii, Four passes were made with the OPICO rake prior to vertidraining and seeding. 18mm tines were used and seed introduced with the Blec seeder.

iv, The surface was left clean following the above treatments.

OPICO rake passed over the surface four times to stand DESSO up. There were some localised inconsistencies with exposed DESSO. vi, Two weeks after renovation the writer returned to site to review the condition of the surface and to discuss with Sportsturf (Maintenance) Ltd, the requirements of the pitch. Discussion was held on site with Jonathan Calderwood and Steven Moore.

Good take with the over seeding initially though somewhat thinner than would have been expected within four weeks of seeding.

Surface algae invasion during the establishment phase due to poor turf vigour. Suspicion of disease in the sward towards the end of June. Turf analyses confirmed no parasitic fungal 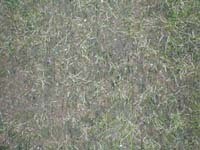 Soil analysis carried out on the pitch confirmed a pH of 4.5, which had dropped considerably from earlier results viewed in the spring from the previous years tests. This necessitated the application of 400Kg of Microcal to be applied to the pitch in order to address this imbalance and provide the turf with a less acidic growing environment, which was obviously restricting growth. Microcal is a slow release granular product and while there was an initial greening up of the pitch, thought to be due to the quicker release of finer particles within the product, growth was still far from ideal. 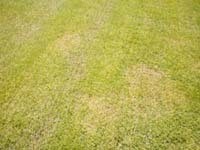 With the Inter Toto game imminent the decision was made to apply a further 400Kg Microcal. A liquid fertilizer application based on 23:0:0 (Scotts), Roots 2 with iron and Aminosorb F were applied to the pitch on Saturday 20th July, to provide an instant source of nutrient to the plant. A further application of 12:0:9 was applied on the Monday to supplement the liquid fertilizer. The results were almost immediate and by Wednesday the pitch had turned around and the Groundsman was actually in a position to cut and present a playing surface for the game to be played out on the Saturday.

On the eve of England's friendly International against Portugal, Villa Park plays host to and England training session. The pitch continues to hold up well and bears little resemblance compared to the surface only six weeks ago. By adjusting and monitoring soil pH we have transformed the playing surface at Villa Park and with a continuation of a sound aeration programme to keep the surface open and adequate nutrition from now on we are not expecting a sudden change in pitch condition. Our only problem now is the level of usage expected on the pitch now that a top class surface has been returned!!