2003 was a challenging, frustrating, satisfying and interesting year in Parken Stadium, Copenhagen. With an extended winter break, we kicked off the season in March with the pitch in excellent condition following the spring renovations. This included aeration, over seeding, nutrition and profitable use of germination /frost covers to aid establishment.

The main challenge for the year focused on the first event in a 3-year contract to stage the World Speedway Grand Prix. This would involve importing 2800 tonnes of shale in 108 trucks from the UK to construct the track. The track was to be laid 8 meters into the pitch along each wing, directly across the south end goal area and cutting the corners of the north side (see photo). 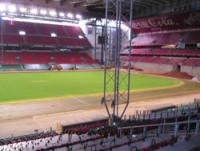 The schedule for June was as follows: 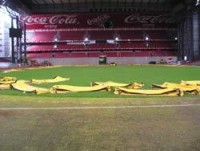 July. Excavation of the speedway track would take one day (which actually turned in to three with coffee breaks!). Therefore we had 30 days to recover from the damage. The strategy was to Scarify/Koro the area from beneath the track and establish new grass from seed. At this point re-turfing was not an option as Desso is present as our pitch stabilizer. To re lay just the problem areas would, in my opinion, produce an inconsistent playing surface. Re laying the whole pitch was an option, but for a variety of reasons the optimum solution chosen was to recover the pitch from seed.

Throughout the year in Parken stadium, the calendar changes, generally with the addition of varying events. 2003 was no exception and I was asked of the consequences of staging two concerts, the Rolling Stones (easy Mr.Kent) and Robbie Williams (easy Mr. Saltman) within the recovery period.

At this stage I was still confident that the optimum solution could be accomplished. To achieve this aim would be dependant on the programme for the pitch during "load in" and "load out" of the respective concerts. Basically with the cooperation of the relevant production crews, this entailed keeping off the pitch for as long as possible around the concerts. 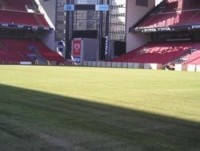 Plan B would be to lay a new surface in preparation for the 2003-04 season. Turf growers in Denmark produce satisfactory turf, but at present do not have the equipment to harvest and lay the turf to the required specification. Investigating Parken stadiums turf options, I travelled to Austria, Holland and the UK visiting farms and stadia. Logistically the UK was not an option due to transport costs. 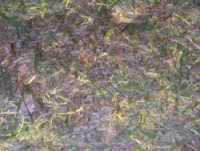 Supposing the recovery of the pitch was unsuccessful, I would take the decision to lay a new surface in the period between the Stones and Robbie concerts. Consequently the demands for the laying of new turf would bequality of turf, speed of operation and dimensions of the rolls.

F.C. Copenhagen completed their season as champions on the 22nd June in Parken stadium. Construction of the speedway track commenced the following day. It had been contracted that the centre of the track remained "green" for the event. This would be, atthis point my only area in need of attention. During construction the contractors discovered that it was quicker to access all areas of the track by utilizing personal short cuts across the pitch. Sometimes you have to admit you are wasting your time and I retreated to the training ground for the majority of the construction period.

It had been agreed that the track excavation would be complete within 24 hours. Almost 60 hours post speedway our renovation work began. The grass had been covered with 2800 tonnes of shale for 8 days. Not that it mattered, but the bulk of this time with the roof closed (what about the centre!) I had been asked and pondered what would be the extent of the damage. My ponderings were proved accurate as, on inspection the track area appeared Surprisingly un-Healthy In That area.

The plant had decayed dramatically and the surface shined with a grease-like algae appearance. Compaction had been a major concern. Removing the grass post event as apposed to pre-event I hoped to localise the majority of the compaction in the top few centimetres. Compaction relief would be achieved with the removal of this layer. The best description of the damage is illustrated with the accompanying photo's. 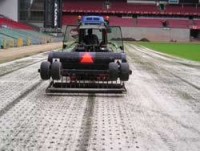 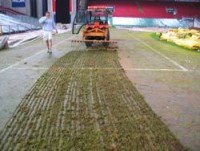 Attempts were made to rake out the rotted plant, thus exposing the Desso fibres. Experimental raking was brief and the Koro took over.

Seed was sown on the 2nd July. Irrigation was monitored over the following week and germination was established. The Stones were due to perform on the 13th and seaweed was applied to the entire pitch on the 8th.

To allow the new plant the optimal chance of establishment I had decided to lay the Terraplas pitch protection tiles in 2 shifts. The majority of the new plants would be uncovered until the day before the show, with the centre of the pitch being covered 3 days prior to show day. All was going to plan as the production for the Stones arrived at the stadium. Around this time I was informed that the pitch plan for the show was to jeopardise the renovation work carried out. The stage was to be situated at the north end of the stadium. Parken has a portable north stand, which can be removed for concerts ext. Second stage was to be positioned in the centre of the pitch. Delay towers were to be positioned on each wing!! Directly onto the 6 day old grass. 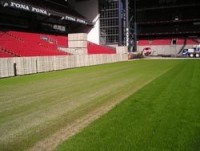 For some inexplicable reason I had not been informed of the construction of these delay towers. It suddenly dawned on me that we had completely wasted our effort and time. Plan B would now be the solution.

I must state that the miss information was on no part the responsibility of the Stones production crew. Robert the production manager is one the most respectful production people I have worked with. Even when I informed him that we were reverting to plan B, he requested I don't inform his crew and continued to respect the "KOTG" signs.

The terraplas was lifted as planned the day after the show. The 15th and 16th were spent leisurely 'Koroing' the entire pitch. Topdressing was applied to the Desso on the 17th and the terraplas laid on the 19th 6 days pre-show. Robbie Williams's productions were delighted. 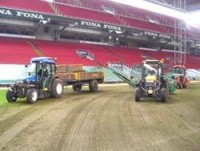 The terraplas was lifted early morning on sat 26th July. That afternoon following the verti-drain the new pitch was laid. Excluding patching up areas, damaged due to a faulty thermostat in transit laying was completed within 18 hours. The pitch was rolled and watered on the 28th and the goals put up on the 29th for the two training sessions. The champions league fixture finished F.C. Copenhagen 4 Sliema W (Malta) 1.

As previously stated the speedway is to be staged in Parken for the next 2 years, the next date being 26th June 2004. At present there are 3 concerts booked in for this year. 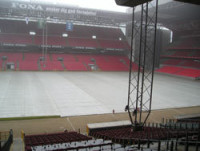 Ideally time permitting we will remove the turf this summer and bring the Desso back to the surface. I have stated that to achieve this, I require 5 weeks from seeding. Euro champions 2004 may be an obstacle as if the Danish team are successful, we will no doubt show the games live in Parken on big screens. That situation may force us to re turf again-but we'll cross that bridge when we come to it.

At present the pitch is improving and the first home game after the winter break is a week on Friday 5th March. The temperature is below 0c. Employing the water pipe heating system and germination covers we have established new grass this winter.

I am looking forward to another challenging, demanding year. Fingers crossed we continue the 2003-04 season with a win!