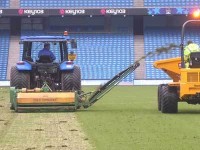 Renovation time is here again at what is the end of our second season at the City of Manchester Stadium. The pitch hasn't looked as good as our first season, but has played every bit as well despite this, helped in a big way by the Desso Grassmaster reinforcement.

Over the winter months we suffered, as others did, by playing games in heavy rain-every game from mid-November to mid-February was played in rain that was a lot more than just drizzle, particularly back to back games over Christmas and New Year against West Brom and Southampton,which were played in what seemed like tropical downpours they were so heavy. As I said we weren't the only ones to suffer, and in some ways makes us appreciate how fortunate we had been with the weather in the two seasons prior to that.

The wet winter quickly accelerated algal growth on the soils surface and on television it looked like the pitch was flooded, in reality it was the shine of the algae off the glare of the floodlights giving a false impression as the pitch has been almost as free draining as it was in the first year.

Now renovation time is here, we are aiming to get rid of the algae by fraize mowing the surface as much as we can, taking into account the Desso fibres when doing so. The first vital part of the renovation work began after our penultimate game of the season when we applied Mossicide to the grass area to try to dry the algae up and make it easier for our contractor, Mallinsons, to do the work necessary.

When the Mossicide was applied, we couldn't cut three days before or after the application according to the manufacturer's guidelines. This, however, coincided with a warm and wet spell, so when we did cut the pitch with the Toro Reelmaster it had to be done three times in one day to get it down-in total this meant that the volume of grass amounted to having to empty the boxes 50 times-150 boxes in total! 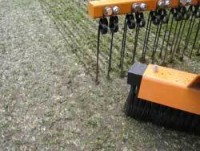 Following this game we had two days of corporate games-one of these days involved almost 500 local school kids playing football, tennis, tag rugby and athletics-and then Mallinsons came in to do the work.

After two passes with the Koro, the pitch was cleaned up by ourselves using a grass rake to stand the Desso fibres upright, and cleaning off the remaining debris with the TM 5 sweeper.

One thing we did differently, was to use Barenbrug's Bar 10 mix behind the south goal line, this area has suffered more than most as it has 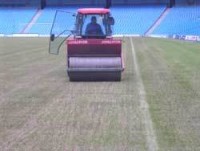 Fortunately, throughout these works, the weather held well, dry in the day with very little rain at night making the pitch ideal to work with, though the irrigation soon corrected that after the work was completed.

As with most large stadiums, the south west corner sees no light at all even in the summer, so we are using the lights to push the seed through in the corner.

Irrigation is still possible so long as we do not use the sprinklers near the rig, the closest ones overshoot the rig anyway, meaning water still gets on the area, with a lot more put on this area than anywhere else due to the quick drying under the lights.

The good thing about this work is that we did our bit as well, it would have been easy just to sit there and watch from the sides as Mallinsons did it all.

To keep on top of the algae problem we will fine tune our maintenance work throughout the summer and into the season, introducing, amongst other things, the use of Profile Greens from Rigby Taylor-this has been the choice of several top clubs and is an approach we will take as well and monitor the results as we go on. 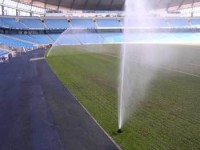 In the last twelve months we have had the F.A. Summer tournament involving England, Iceland and Japan, Great Britain v Australia in the rugby tri-nations tournament and also had a sell-out 59,000 concert for the Red Hot Chilli Peppers, as well as finishing this season in our highest ever place in the Premiership.

The coming summer sees us hosting the opening game of the women's Euro 2005 tournament (we should have had both semis and the final, but they clashed with U2 so they are now being played at some of the smaller clubs in the area).

All highlighting the pulling power that both the club and the stadium now enjoys-obviously it involves more work and stress for everyone involved, but to say you have helped to stage these events makes you feel that you are doing your bit to put the club further on the map.

It is also, more importantly on a personal note, a good benchmark or measuring our capabilities as Groundsmen. Following the concerts we have just 4 ½ weeks before a possible friendly, so summer will soon pass us by-assuming we have one!

Anyway, enough from us here at City obviously we wont be the only ones with a lot to deal with this summer so good luck to everyone out there this summer, as we await our next game in just two weeks!