0 Renovations at the Madejski Stadium

Renovations at the Madejski Stadium At Reading Football Club we play host to 1st team, reserves and Premiership rugby union. In all we had 50 professional fixtures last season, including 6 "double headers" with football and rugby on the same weekend. We are fortunate enough to have a Desso system installed to cope with the rigours of dual-sports but, even with the Desso, the rugby does tend to cause a fair amount of damage through scrummaging, especially towards the end of the match when players become tired.

The most damage tends to come from having both sports on the same weekend. Any damage caused by the football on the Saturday doesn't get a chance to recover before the rugby on Sunday. In addition to the matches last season we also hosted two concerts - Elton John on 26th May and Summer XS on 5th June. Also, as the 1st team had just missed out on a play-off place, we turned the pitch over to our Academy and Marketing departments who arranged a number of local cup finals, training nights and a 6 a side tournament before the pitch was covered for our first concert. Four staff are based at the stadium, including myself and my assistant Greg Bolton.

Our main task is to prepare and maintain the stadium pitch for both sports. The other two members of staff, Gordon Neate and Melvyn Lovegrove, maintain our numerous grass and landscaped areas around the stadium. We also have 3 staff based at our new training ground, including Jem Fox who used to look after the stadium pitch until he took on the unenviable task of running the new facility. The training ground consists of a Fibre-sand pitch, 4 sand ameliorated pitches and 4 soil based Academy pitches. It was constructed last year by Kestrel Golf & Sports, who also recently installed sand bands across the ameliorated pitches. 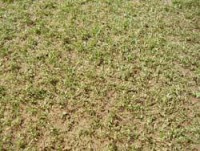 At the stadium, although we had a fairly successful season in maintaining a playable surface, we did suffer from poor surface drainage which led to a loss of grass coverage, especially through the centre of the pitch. This was partly due to a lack of a regular aeration programme.We don't have our own aeration equipment, so have to rely on contractors - something I am resolving by purchasing a Toro 648 Procore pedestrian aeration unit in the coming weeks. This led to a build up of organic matter at the surface which would not allow moisture through to the root-zone.

We also had a fairly high percentage of Poa, which had established itself in the sward. I made the decision, along with our consultant John Hacker from PSD, that the existing sward and organic layer had to be removed for the forthcoming season. We chose Kestrel to carry out our renovations as they are a local company and had constructed our training ground to a high standard.

Renovation works began on Tuesday 7th June after the last concert had been cleared away. This allowed us a period of just under 8 weeks until our pre-season friendly against Tottenham on 30th July. First task was to Koro the surface to a depth of 15mm to remove the existing vegetation and organic layer. This was also to expose 20mm of the Desso fibres which had become embedded in the surface. This took most of the day and achieved the desired result in one pass.

The next task was to pull a meadow rake through the surface in numerous directions to remove any remaining vegetation/organic layer and to stand up the Desso fibres. This was closely followed behind by a tractor mounted sweeper to remove any loose debris.

The next morning was spent carrying out more raking and sweeping until myself and the consultant were happy we had a clean surface. Once this was achieved, Kestrel verti-drained the pitch to a depth of 200mm to relieve compaction caused by the season's play and the concerts. The pitch was then fertilised with a Mascot 6:9:6 pre seeder. ready to be seeded.

We had chosen a Rigby Taylor R14 ryegrass mix into which we had added 10% slender creeping red fescue. We included the fescue in the mix to act as a filler around the base of the ryegrass as it establishes. We chose the Rigby Taylor mix because we had such a success with their R11 mix at our training ground. The seeding was carried out using 10 bags firstly in two angles lengthways on the surface with Kestrel's Vredo disc seeder. This was followed up with a further 4 bags put on widthways with a Once seeding was finished I spread 8 bags of Activate R granules from Rigby Taylor. This is a potassium humate based feed to aid germination and root growth. We had been very fortunate with the weather and the whole operation was completed in 3 days which gave us a fighting chance of being ready for the start of the season. The first cut was carried out after 13 days from seeding, once the grass had reached a length of approximately 50mm.

This was carried out using our Honda rotary mowers at a height of 35mm. We used the rotary mowers for 2-3 weeks until the grass was strong enough to be cut using our Dennis G760s. A couple of days after the first cut we fed the pitch with 14 bags of Mascot 12:0:9 and a further 8 bags of Activate R. This was followed up by a further application of 12:0:9 and a 14:2:7. We also sprayed a liquid application of Aminosorb F, Activate F and Breaker Triple wetting agent. Due to the high temperatures we have experienced lately in the south, we have had to water the pitch more often than we would have liked. This combined with other factors led to a vigorous outbreak of leafspot. We sprayed the disease with Dachonil, but had to follow this up with a further application of Iprodione. The disease led to a large amount of die-back in the leaf of the plant which we will verti-cut out once we have got our first two games out of the way. It also slowed up the growth of the plant and didn't allow it to mature in the way we would have liked.

With only a week to go to the first fixture, the plant is only now beginning to show signs of new unaffected growth, but is still very weak in the corners of the pitch especially. We are now relying on our Desso system to keep the sward intact until it is mature enough. Machinery based at the stadium: