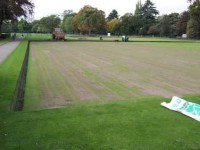 After a particular long and arduous season of play, the bowling greens (five) at Victoria Park are finally receiving their end of season renovations. The greens were officially closed on the 30th September. However, due to the recent inclement weather, end of season renovations had been delayed until this week. It's been a very busy time for the council's grounds maintenance contractor (Glendale) who are responsible for maintaining all the fine turf and sports facilities, including their 18 hole golf course ( Newbold Comyn Golf Club).

Recent fluctuations in the weather had initiated an attack of fusarium on two of the five greens, prompting Graham to organise some spraying of Roveral Green (Fungicide) to control the disease. This was completed prior to the renovation works.

The greens were then top dressed by hand using a Topspread hand barrow, applying about 3-4 tonnes of Ruffords No 3 70/30 root zone per green. The top dressing was then luted and drag matted into the playing surfaces.

The recent moist weather conditions is also encouraging earth worm activity on some of the greens and banks around the greens, so an application of Carbendazim will be sprayed in the coming weeks to control the worm populations during the winter months.