by Lucy Nicholls
in Industry News, Football, and Synthetics
on 15 Dec 2014

The 1st round of the FA Cup recently made its debut on a 3G artificial pitch between Maidstone and Stevenage with synthetic surface maintenance specialists Replay Maintenance playing a key part in the historic game. 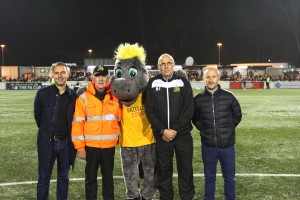 Following the Football Association's decision to allow the use of 3G pitches at every stage of the competition, the first ever FA Cup game, which was also live on BT Sport, took place at the Gallagher Stadium - home of Ryman League side Maidstone United. The pitch is certified to the FIFA 2 star standard - the highest rating, and is awarded to artificial pitches that are deemed suitable for professional football.

It was also a monumental moment for Replay Maintenance. The company carries out their Revive Plus+ process on the pitch four times per year to ensure that the pitch is always in pristine condition. The company were also on hand to support the club in the run up to 1st round replay being played.

The unique Replay Revive process extends the life of a synthetic sports pitch and minimises the risk of injury to players by improving surface grip and reducing compaction. It uses a specially developed, single operator machine to remove contaminants from a rubber infill surface. Rotary brushes penetrate deeper into the infill compared to static brushes, which are commonly used, breaking up the contamination and removing it with a powerful vacuum filter system for disposal off-site. The rubber in-fill is then filtered before it is distributed back onto the surface. It helps reduce compaction of the surface and lifts the pile of the carpet whilst enhancing its porosity and helps maintain the playing characteristics.

Commenting on Replay Maintenance's part in the cup fixture, managing director Garry Martin said: "We enjoy working with Maidstone United's stadium manager John Harvey along with everyone else involved. We take great pride in all of our work and are extremely proud to have played a part in such a historic moment in the oldest football competition in the world."

The FA recently announced plans to invest in new and improved facilities which will include more investment into 3G pitches. These facilities will help develop better players and the key to making sure they perform as designed will be regular maintenance procedures. Mark Pover, National Facilities manager at the FA, recognises the importance of such procedures and praised Replay Maintenance and the Club for their approach and the importance they place on the maintenance programme at the Gallagher Stadium.

"It was a landmark occasion for a 3G pitch to be used at this stage of the FA Cup. We are always reminding owners and operators of 3G pitches that 3G pitches need to be maintained regularly and reflect the programme of use. Maidstone United are a club that have a very good maintenance programme. . Clearly, Replay Maintenance have helped compliment what the club do on a daily basis to get the best out of the pitch and the best performance from it," he said. 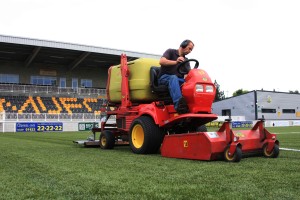 "We've got a great working relationship with Replay Maintenance. The big factor for us is that they are a recognised contractor and are supporting the FA in establishing a 3G register of accredited pitches. They provide us with advice and carry out the maintenance work that is required. Not only are they integral to our support and maintenance programme but their work is absolutely vital to maintaining the FIFA 2 star recommendation," he said.

Maidstone United was the first football club in Britain to develop a purpose built stadium using a 3G pitch. Aside from being the first team's home pitch, the surface is used for UEFA training courses and is played on by a number of community teams as well as businesses and schools. The extra usage on the pitch in between Maidstone Utd's home fixtures enables the club to generate additional revenue - something which John believes is a great business model to replicate.

"Our pitch is hired out for 50 hours each week. It's unbelievable - you wouldn't get that on a grass pitch this time of year. The future of 3G pitches is a no-brainer really - especially for clubs like us. Personally, I think it's a great business model.

"We've maximised the life of the pitch through the work and advice from Replay Maintenance and as long as we keep maintaining it, then from the club's point of view, it's a revenue lifeline."