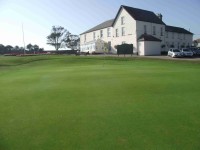 Efforts to re-establish traditional Links-type grasses at one of the oldest golf clubs in England are being spearheaded by Rescue, a highly-selective herbicide from Syngenta designed to eradicate perennial ryegrass and other invasive coarse-leaved grasses from close-mown and longer areas of fine turf.

Trialled on Felixstowe Ferry Golf Club's practice putting green in late May 2011, Rescue was applied last October by pedestrian sprayer to 18 of the 27 greens on the challenging Suffolk seaside golf course.

"Results have exceeded expectations," commented course manager, Glenn Rayfield. "Most of the ryegrass was taken out within six weeks of application without impacting on any of the surrounding finer grasses that we are looking to encourage. Accompanied by judicious over-seeding, Rescue treatments will now be part of an on-going course improvement programme, being used as and when required to help restore the finer, Links-type grasses that were predominant when the club was founded back in 1880."

Glenn explained that the club had been trying for a number of years to eliminate ryegrass from putting surfaces using a combination of cultural and mechanical treatments. Having achieved limited success, he was keen to learn more about Rescue at one of a series of product launch roadshows staged at golf clubs throughout the country in 2009.

"Rescue's capabilities appeared to be exactly what we needed," he said. "Encouraged by the club's consultant agronomist, George Shiels, and with support from the product's suppliers, Everris, I presented to the committee the case for using Rescue and received the green light to carry out a trial in early summer 2011 on our practice putting green." 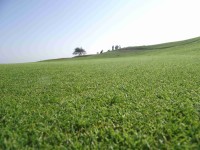 On 19 May, half the putting green was over-seeded with a fescue/bents mix before being sprayed five days later with Rescue at the recommended spring application rate of 1.3 litres/ha. Within two weeks, the perennial ryegrass within the putting surface was dying back leaving noticeable bare patches among the existing finer grasses. These patches soon filled in as the newly-overseeded greens mix germinated and established.

Having achieved excellent results with Rescue on one half of the putting green, Glenn treated the remainder in early June last year. He also received unqualified approval from the club to carry out autumn spray applications of Rescue to every green on Felixstowe Ferry Golf Club's 18-hole Martello Course.

"Observing the recommended autumn application rate of one litre per hectare, we applied Rescue once again by pedestrian walk-behind sprayer, to ensure absolute accuracy of application, onto the target area," explained Glenn. "As with the putting green, the herbicide treatment was preceded by over-seeding with a fescue/bents mix to promote new growth and grass cover once the ryegrass had died back."

And die back it most certainly did, a result achieved within just six weeks, according to Glenn. "To coin a phrase, Rescue does exactly what it says on the tin. It eliminates ryegrass and other coarse grasses, allowing us to restore finer grasses and create putting surfaces that are consistently firm, even and true."

"I must admit that spraying a herbicide onto a golf green is not something I would have done if I had not had full confidence in Everris and its product range. Having used Rescue on our 18-hole course with great success, I am looking forward to treating our nine-hole course before moving outwards from the greens, a step that will move the golf course forward in helping restore its native Links grasses."

An update for those currently or considering using, Rescue to control ryegrass on the golf course.

No need to register - just turn up. A light lunch will be available on the Everris stand (B39) at 12.30pm for anyone attending.