"It's a fantastic product and I wouldn't hesitate in recommending it to any golf course suffering from Ryegrass on its greens."

So says Steve Smith, head greenkeeper at Gillingham Golf Club, speaking about Rescue, the new selective herbicide developed by Syngenta and distributed exclusively across the UK and Ireland by Scotts Professional.

Steve has good reason to sing Rescue's praises as it has transformed the condition, run and appearance of nine older clay-based greens that had resisted all previous physical and agronomical attempts to rid them of Ryegrass.

"For eight years, we'd scarified, over-seeded and top dressed, but the coarse Ryegrasses never seemed to go away," he said. "It was ruining those particular greens and was also beginning to creep onto our nine USGA-based greens, drawing increasingly critical comments from members and visitors. It was vital that we found an effective solution and I am delighted that Scotts came up trumps."

Steve explained that as a long-term user of Scotts products, he has known the company's Technical Area Sales Manager, John Noyce, for many years. "I mentioned our continuing Ryegrass problem to John in early 2008 and he told me about Rescue, saying that the new selective herbicide was currently entering field trials with a view to being released commercially in 2009."

When Steve was offered the opportunity by John to take part in the trials, he accepted without hesitation.

"We had to observe strict criteria regarding application procedures and record-keeping, but the whole process was simple and straightforward," commented Steve. 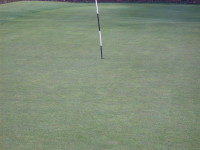 "In a nutshell, we applied Rescue in the first week of June 2008 by knapsack sprayer across two of our worst-affected greens. A blue dye was added to the liquid so we could track the application."

Steve says that discoloration of the Ryegrass was evident within 10 days, followed within a week by wilting and dying back of the coarse grasses. The two sprayed greens were soon recovering and showing positive signs of an effective treatment. Spot applications of Rescue were made to the two greens in October 2008 to deal with any returning Ryegrass.

Steve explained that the trials had been carried out with the full knowledge and support of the golf club. Notices were displayed prior to the spraying day and the two greens were taken out of play for 24 hours, being replaced by temporaries. The same actions were taken seven months later in May 2009, when Steve applied Rescue to all Ryegrass-affected greens across the course, achieving similar positive results.

"Although we had a fair bit of disease on the greens when the snow finally cleared earlier this year, this was treated successfully with Syngenta's broad-spectrum fungicide, Daconil Weather Stik," said Steve. "The surfaces are now looking really good following a first spring feed with Sierraform STEP Hi-Mag mini granular trace element package. I anticipate a continuing sustained improvement as we enter our summer liquid feeding programme."

"All in all, I'm a fan of Scotts products and even more so following the successful removal of Ryegrass from our greens by Rescue. I'm planning one more all-over application across the older, clay-based greens and, hopefully, that will be the end of blanket treatments as I am confident that we will be able to control the ryegrass from then on using spot applications solely."

Rescue can be used as part of a Scotts iTurf programme. It is available in 1 litre bottles from Scotts distributors. For further information, visit www.scottsprofessional.co.uk, call 01423 201100 or email prof.sales@scotts.com.