0 Rescue stops ingression of ryegrass in its tracks 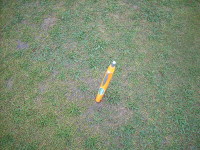 Although he would have liked to have applied the herbicide a little earlier, course manager Melvin Tassell was highly impressed with the effect of the Rescue treatment made last autumn on the coarse ryegrass present in the greens at Lullingstone Park Golf Club.

Applied by knapsack sprayer at a concentration of 40ml mixed in 15 litres of water - equivalent to 10ml per 100m2 - Rescue is the new selective herbicide developed by Syngenta and distributed exclusively by Scotts Professional.

Having learnt about Rescue from Scotts' Technical Area Sales Manager, John Noyce, Melvin was keen to use the product. "However, it was still undergoing trials when I first spoke with John," he recalled. "Although results were looking promising, I had to wait until Rescue had gained full label approval before we received our first delivery. The pack arrived on the course in the first week of October 2009 from our local distributor, Collier Turfcare, and was applied to the greens within a day or two followed by overseeding."

Located near Orpington to the south east of London, Lullingstone Park's 18-hole course is described by Melvin as being of inland links-style laid out in an ancient deer park. Measuring 6770 yards, the course is very hilly and has undulating, free-draining fairways. Greens are old-style soil type supporting a mixture of poa, fescues and bents with long, slender grasses in the rough. The club's adjacent nine-hole course is of a different style, being laid out in a sheltered tree-lined valley with tight, narrow fairways. 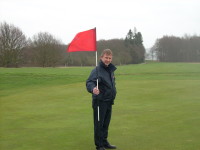 "The greens on the shorter course have been overseeded with a dwarf ryegrass/creeping red fescue mix and did not suffer from the same ingress of coarse ryegrasses that we experienced on the greens on our 18-hole course," explained Melvin. "Why it happened remains open to question. The seed could have drifted onto the greens in the wind following a major reseeding of high wear areas the previous year. It was very wet when we reseeded so it is possible also that seed was walked onto the greens by golfers from the newly-sown bunker surrounds and walkways.

Whatever the cause, the ryegrass influx was very noticeable last spring on virtually all 18 greens, plus the putting green."

He points out that the initial Rescue applications made last October had a marked impact on the ryegrass, but poor growth conditions since have left the greens a little bare in places. Plans are now in hand to apply it again when soil temperatures rise to above 10 degrees C.

As part of an integrated approach, this treatment will be accompanied by overseeding, preceded by brushing to help stand up the fine fescue grasses. Melvin, a user of Scotts products for many years, also uses H2Pro wetting agent and after an initial application of Greenmaster Pro-Lite Invigorator at the beginning of spring to stimulate healthy growth, he switches to Greenmaster Liquid 10-0-10 applications every four weeks once growth has kicked in.

"Although good for high wear areas, ryegrass is no friend of greenkeepers trying to produce fine, true and consistent putting surfaces. Coarse grasses are a real problem in greens, particularly in the spring due to the uneven growth at that time of year when finer leaf species are slower to start growing. Initial results with Rescue and the technical backup from John have given me confidence that we will overcome the problem and be able to concentrate again on maintaining the best possible golf greens throughout the year."

Rescue can be used as part of a Scotts iTurf programme. It is available in 1 litre bottles from Scotts distributors. For further information, visit www.scottsprofessional.co.uk, call 01423 201100 or email prof.sales@scotts.com.