by External source
in Golf, Industry News, and Renovations & New Builds
on 11 Jul 2016 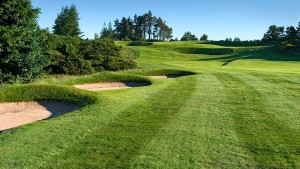 Work to restore elements of James Braid's original design at The King's Course at Gleneagles has reached completion.

Located in Perth & Kinross, Scotland, the club is building up to The King's Course's centenary in 2019.

The project was overseen by Scott Fenwick, Gleneagles' golf courses and estate manager, who commented: "We've taken the course back to how it would have been in Braid's day. I started here in 1980 but by the end of that decade we had begun to change the whole character of The King's Course to meet golfers' expectations at that time."

The course's fairways have been increased in size as part of the work, reversing a project carried out in the late 1980s which saw many narrowed.

"The original bunkers within the fairways ended up sitting in the rough which meant the approaches became so tight that golfers had to fly the ball onto the greens," said Fenwick. "There was a surge in demand for this type of play at the time."

A new style of grass cutting is also likely to affect play, with roughs thinned out and fairways now being cut in a traditional block style. This is to emulate the cut achieved using horse-drawn gang mowers during Braid's time.