by Gordon Jaaback
in Consultancy
on 05 Dec 2005 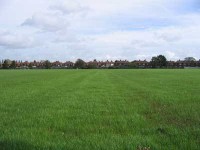 The intention of secondary drainage installation on football pitches is to remove surface water as quickly as possible. Throughout the wet winters the aim is to provide firmer grounds that enable play to resume as soon as possible after rain. The problem arising on many existing undrained sites is the lack of a suitable drainage outfall. In urban areas many of the pitch development/renovations are surrounded by residential properties with no natural watercourse present. Furthermore, the waste water authorities will not always permit drainage of grassed football pitches to enter their storm water pipe reticulations. Where outfall is permitted, it is to be controlled in accordance with MAFF/ADAS Reference Book 345. With heavy clay soils established to grass cover and slope not exceeding 2% the permissible outfall rate is in the region of 6 to 8 litres per second per hectare.

In a current pitch development for the Hertfordshire County Council in Borehamwood, North London, the requirement on a 4 ha site was to restrict outfall into the storm water system to a rate of 20 litres per second. The site is a very wet one with firm plastic clay down to below 1.6m. There was a natural slope though undulating of nearing 2%. After stripping the topsoil, this gradient was laser-graded to maintain this fall across the direction of play. The very wet conditions proved difficult in early grading but the warmth over July and August helped to firm up the surface. The deeply-wet subsoil did confirm the ne 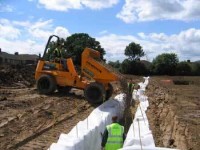 In considering the extent of the rainfall to be allowed for, tables compiled by HR Wallingford were studied. It was agreed to consider the highest precipitation within a 5 year return period for the duration of 30 minutes. This was established at 21mm. To cope with this concentrated rainfall, estimates were first made of the water that would be retained before run-off commenced. This quantity would comprise that amount that was withheld in the grass cover, the amount held in the micro-depressions of the soil surface and the amount taking up all the voids in the slit and lateral drainage installation. Totalling between 8 to 12 mm the run-off quantity was therefore estimated at 12mm.

Three attenuation (temporary water storage) trenches measuring 1 m wide and 1.6m deep were filled with 40mm stone within a geotextile to 1m depth. Above this there was a 300 mm depth of root-zone material, the surface of which formed the invert level of a grassed swale 300 mm deep with side-slopes of 1:10. The temporary storage capacity of the three stone-filled trenches and swale design would more than adequately contain the 12mm of water run-off from each pitch and further ensure that the bottom pitch did not accumulate any surface or underground surplus water for the pitch above it. Gulley drains installed into the root-zone further enable the maximum intake of all the water that the stone-filled trenches could hold without undue delay.

Constructed between June and September 2005 the pitches have still to establish but to date all surplus water run-off has been satisfactorily controlled. In order to improve the porosity of the clay loam soil three applications of gypsum were made each at 5 tons per hectare. Slit drains at 1m spacing are to be installed in May and thereafter sand dressings will be made annually for the first five years at least. The established swales have proved to be a positive means of controlling and temporarily storing surface water flow and with a depth of 300mm and shallow gradient on either side, they are easily mowed without any scalping. 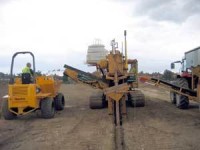 Urban redevelopments are currently a priority and the provision of an adequate drainage outfall or temporary storage is a main concern where properties below the site would be subject to damage from flooding. Attenuation systems assist in controlling and restricting peak-flow outfall rates. Yet outfall to lower ground is inevitable on heavy clay soils at the time of persistent rains in the winter. The great benefit of attenuation is the ability to limit this flow rate to one that would be expected from a greenfield site. The calculations in accordance with the MAFF/ADAS No 345 publication ensure that an outfall can be created to adjoining lower ground where no natural watercourse exists - at a rate that would be reasonably expected if the site had not been developed.


Gordon Jaaback is an internationally experienced agronomist and project manager. He can be reached on telephone 01732 350351 or email at gordonjbk@turfandgrass.com