0 Results that can bring change

Many of the readers may remember an article that was published two years ago when I was Head Groundsman at Willenhall Town Football Club here in the heart of the Black Country. How things have changed since then. I ended that season with 135 games played. The renovation works that were planned and talked about in the magazine were implemented apart from one.

Subsequent to the article going to press, Lynn Hilton, PA for Sisis, got in touch and asked if I would like to have the pitch scarified and seeded free of charge. This I think was due to the fact that a lot of equipment I was using at the time was Sisis's and I promoted that fact in the magazine! I obviously jumped at the chance.

Dates were arranged and Lynn came to the club along with Keith Vertigan to interview me, and to get John to seed the pitch. It was agreed beforehand that the pitch didn't really need scarifying as any remaining grasses would be ripped out. If irrigation hadn't been a problem then scarification would have been carried out.

Seeding was carried out in two directions in the worst areas. This resulted in good coverage for the start of the season. All at the club were happy with the lush surface at the start of the season. Something that they hadn't seen for quite some time. I stayed with the club until the end of August as it became apparent that the club had ideas of putting more games on for revenue purposes. In the first month twenty games had been played. I argued my point and decided that it was time to move on. There was an amicable parting and I still keep in touch with the club. 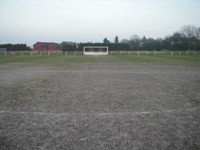 Towards the end of that season I approached the Chairman with my renovation plans, supplemented with figures. This was unheard of, as people at the club had generally "mucked in" at the end of the season. An agreement was met and renovation work was carried out. After some initial problems with the contractors, the pitch was "put to bed" satisfactorily. Pre season work was carried out as planned and results were good. As the new 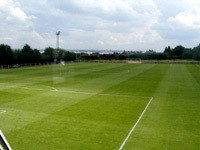 At the time of writing I have had 83 games played with the prospect of yet another 10. Due to the fact that a certain respect has been drawn between the Committee and myself, my renovation plans have been submitted for end of season renovation work this year, and have been granted. The club realise that they now have someone on board who wants the best for the pitch and all that use it in terms of enjoyment and player safety.

ALS from Telford will begin renovation work on Friday 16th May. I have always found ALS and namely Phil Greenway, good to work with. This work is supplementary to work that I will carry out myself. The work will consist of the following:

Pre season work will consist of the following:

The above work should bring the pitch up to the same standard if not better than the start of last season. (see photo).

It is a difficult task as four teams use the pitch. On average there are three to four games per week played on it. What exacerbates problems is the fact that 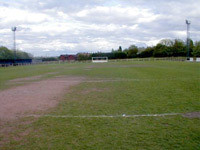 I am at present working on getting a compact tractor at the club that could be utilised for tasks such as drag matting and brushing purposes along with sand application when necessary. (It's a slog having to walk 120 yards each way with a wheelbarrow!). I did manage to get a replacement cylinder mower last year for one that had quite clearly seen better days. This would benefit the pitch tremendously in the winter period as levels do get knocked about a bit. I only have a mower to try to get levels right but sometimes the mower is best left in the shed as it can pick up particles of material that get into all the nooks and crannies of the machine that leads to inevitable problems. This in turn could lead to expensive repair costs.

I firmly believe that it is important to keep the "powers that be" informed as to what is necessary to achieve as good a quality surface as possible. It generates a positive feeling that generally helps the Groundsperson get what they need to obtain the end result that they ultimately want.

In conclusion I would like to add that readers may remember me for fighting the corner for Groundsmen at a lower level. It seems that now we are getting the recognition at long last. It was good to hear that a colleague of mine, Tom Williams, from Tipton Sports academy was amongst the nominees at a recent FA awards evening at Birmingham County AFA headquarters for his pitch. Congratulations Tom. Well deserved.