by Matthew Campelli
in Rugby, Industry News, and Renovations & New Builds
on 19 Apr 2016

A proposed 6,000-seater stadium for Truro, Cornwall has moved a step closer with local retailers on board to bankroll the £10m project 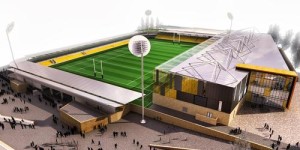 The Stadium for Cornwall development - which is being pushed forward by Truro and Penwith College, the Cornish Pirates rugby club, and property developers Inox Group and Henry Boot Developments - was given the green light by Cornwall Council last July.

When built, the stadium will be home to the Pirates and will be a permanent base for the college's business centre, elite sport, hospitality and catering facilities. It will also hold a 200-capacity conference centre for meetings and functions. The facility will have an initial capacity of 6,000, but there is the option to increase that to 10,000.

The consortium has revealed that finance for the stadium's construction will be derived from proceeds generated by the retail development in nearby West Langarth.

Tim Edwards, who represents West Langarth's estate agent Morgan Williams, said there was a "formal offer" in place for one retail unit and added there was "detailed dialogue" with several other potential tenants.

"To date we have received sufficient registrations of in principle interest to pre-let the whole retail terrace, which is at the heart of this exciting scheme," he added.

Cornish Pirates chair Ian Connell added that the stadium was "vitally important" to the club and was a "crucial part" of its plans to bring Premiership and European rugby to the county.

"The Stadium for Cornwall will provide access for the entire community of Cornwall and will be capable of hosting an array of different organisations and clubs," said Connell.