Re-Turfing of the Suncorp Stadium Brisbane 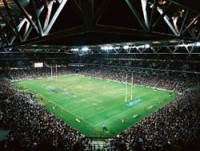 In July 2003 the playing surface was re-constructed and re-turfed within 5 weeks by Strathayr the principle contractor. It involved removal of the top 60mm vegetation and soil using a Koro Top Maker, with the removed material being donated to the local parks department. A further 100mm of sub base material was stripped off, blended with mesh elements and 12% peat moss by volume (total of 1080 metric tons) and stored on site ready to be relaid.

Drainage system of the pitch consists of a 100m gravel layer overlaid with 280mm of sand (depth determined by moisture release curve).

Existing Toro irrigation nozzles were upgraded to Toro 44's and reset into position followed by the relaying of the blended sub base materials, laser levelled at +/- 10mm. The crown of the pitch was reshaped and formed, soil moisture sensors installed and finally re-turfed. 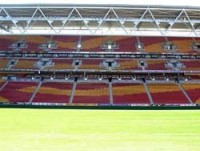 Legend Bermuda turf was reinforced with mesh elements, (75 x 50mm nylon mesh approx) and delivered in continuous rolls 8m long x 1.2m wide x 50mm thick. The turf had been growing for 8 months on a local turf farm, where regular inspections were made to determine its profile and stability. The end product was a revitalised refurbished playing surface that was able to provide playing characteristics and performance demanded by the sports playing professionals.