It's been a while since I've written an article for Pitchcare (sorry Dave!) so, when doing this one, I wanted to take time to reflect on my three years (crikey) since leaving Spurs and share with you some of my trials and tribulations since then: becoming self employed and setting up my business, Greenbay Grounds Maintenance Limited, which is now entering its fourth year of trading. 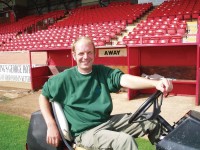 I want to start by saying that, deep down, (very deep at times) I do love this profession. It's always been good to me and I've been very fortunate to meet, and work with, some tremendous professionals and, because of that, I think I will always be involved in this line of work.

I will share with you a bit of my past as it will link up with the start of my company later in the article.

I grew up in Kettering, Northants, and used to follow my local team as a kid. I got to know the groundsman and would help him out in any spare time I had. I was fascinated by the work that went into preparing 'the stage' for the players.

When I left school I worked at Overstone Golf Course for five years, which I loved, then moved on to to Northants County Cricket Club for a season under the instruction of David Bates. I heard of a football job at Rushden & Diamonds and worked there from 1998 to January 2003, working my way up to Grounds Manager. I learned a lot during this time, not just about groundsmanship but also about being a manager.

I always wanted to work at a top club and, in 2003, I had my chance. I joined Darren Baldwin's team at Spurs as Head Groundsman at White Hart Lane under Darren. I was 27 years old at the time and, despite the travelling, I was ready for that job. I feel I did a good job at Tottenham and, with Darren's backing, we improved the quality of White Hart Lane over time. James Buttar (my former assistant at RDFC) has taken on the baton and done an amazing job in establishing Spurs as one of the top pitches in Europe I would say. 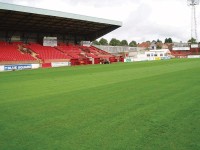 In the summer of 2005 I heard that the Head Groundsman at Kettering Town Football Club, Sid Chapman, was about to retire, and I saw an opportunity to fulfil another of my ambitions; to run my own business. I had done my maths. I knew what machinery I would need to be effective (a triple mower!). The money was obviously lower, but I took on the contract to look after the Kettering pitch as part of my new company.

This contract formed around a third of my old earnings. I would save another third without the travelling costs down to north London, and then gambled that I would make up the other third with gardening jobs to start with.

I'll be completely honest and say those first few weeks were soul destroying! Fridays were spent carrying out important work prior to matches at the ground and then Monday morning I was weeding in a small garden in a back street of Kettering - these times hardened me to the reality of running a business!

The first year was a real struggle. Naively, I believed hard work and passion would carry me through - wrong! I had to be a mechanic, accountant, debt collector and all things in between, such as setting down charts and time management. I had to learn about becoming a business person. I listened to other business people and grew from there.

I had a big break in the summer of 2006 when I secured the maintenance contract of an internationally renowned food manufacturer in Northants on their seventy-two acre site. I also won some local Business Centre contracts and got involved again at Rushden & Diamonds when Ewan Hunter departed to Nottingham Forest.

In the summer of 2007 I landed the contract at Corby Town FC. By now, I had sharpened up my business acumen to go alongside my groundsmanship skills. Currently, my team and I have built the business up to a stage where we own several vehicles, a trailer, an assortment of triple and hand mowers, hand tools and our own premises. We have spent a lot on marketing to continue to grow the business. I'm proud of my staff: one full time member, one part time plus four or five key sub-contractors.

All work is scheduled with flexibility built in. Agreeing the contents of a contract is key. This cuts out many unnecessary and time consuming conversations. For example, all work at Business Centres is programmed in and carried out accordingly, i.e. lawns presented well, bedding plants set in, large lawns kept tidy, trees and shrubs kept looking good and weeds kept under control.

I still keep my hand in with the football clubs. Experience has taught me to have good communication with the manager and coaches of clubs, but stick to the points. I put a brief list on dressing room walls so that users know what is expected of the pitch. There's usually some brief dialogue on Friday mornings about pitch requirements, and we go from there.

Kettering and Corby have similarly constructed pitches - average (very!) drainage systems and 70:30 constructions. They have improved though, and those sleepless Friday nights when it's raining have become fewer! I devised a plan of maintenance for each pitch that suits their individual needs and budgets. It may not be Premier League quality, but it does suffice.

For both clubs I vertidrain four times a year, in September, December, March and June. In conjunction with aerating I fertilise straight after with 12:3:9 in summer and 4:0:8 in winter. The fertilising works better when there's oxygen in the ground and the plant has a chance to take the nutrients up better. We oversow with perrenial ryegrass during renovations.

After each game, divoting takes no longer than a couple of hours and we mow two or three times a week in summer and once a week during winter. We brush the pitches, on average, once a month.

Renovation is pretty basic, forty tonnes of sand, aerate, brush in seed and feed. We spray for worms and weeds in late September/early October. We are currently hand stitching (bit by bit) Desso into goalmouths.

Currently, money is a bit tight - everywhere! We constantly keep an eye on the accounts and budget accordingly and try to set money aside for a rainy day. I feel pressure - pressure for my employees and their families, my customers who expect high standards, pressure from the bank, suppliers etc, etc! The last three years have aged me and given me a different perspective. I will continue to try and grow the business and branch out into different areas over time, if I can.

I still stay in touch with people in the profession. I have a lot of admiration for those involved in the stadiums because you cannot produce a top class surface without good experience and dedication. The standards set at the top do filter down the leagues, and the levels of pitch maintenance in non league are far higher than when I was a lad.

I recommend becoming self employed to anyone, but it's not for the faint hearted. The security angle to me is backing yourself and your judgement and experience. If you believe, then you will believe it's possible. I always scrutinise and question myself ,but I've built up a good network of people and I'm more focused on the business now and clearer about what the future holds.

I don't look back now. I'm lucky that I've had both experiences and I prefer being in control of my own destiny. I can dictate events and I will do my best to educate managers as we progress.

I keep in touch with Jim Buttar at Spurs and Ewan at Nottingham Forrest (hi guys!), both are tremendously dedicated groundsmen who work long hours and have long journeys. People like that are the future of the industry.

I've tried to take bits from all the people I've worked with and come across to help me now. Combining that with the business side of things has certainly been an interesting learning curve. Here's to getting through a possible recession!

PS: Thanks Brads for an excellent mower, it's putting in the hours now, I can tell you!