by Charmian Robinson
in Industry News
on 12 Dec 2011

Richard Campey, Managing Director of Campey Turf Care Systems of Macclesfield, has won the Lifetime Achievement Award at the Institute of Groundsmanship Industry Awards at the Reebok Stadium, Bolton.

Richard Campey has spent the past 25 years promoting a strategy of best practice sports ground renovation and maintenance, which has not only enabled him to build a successful company but importantly also help ensure that young people especially have the best possible playing surfaces at their disposal.

In addition, Richard's 'natural instinct' for the turf care business has also earned him a reputation as someone who sets industry standards - he was, for example, the person who introduced, in 1997, the revolutionary Koro machine to this country. The impact this has had on the way sports pitches are managed today is profound - and koroing is now a recognised generic term in the industry.

The Award was presented, in Richard's absence, to Campey Turf Care Systems Sales Director Simon Gumbrill by Richard Walton from category sponsor Everris and Richard responded via a video and skype link. "I am surprised and delighted to receive this award and would like to thank the IOG and all those who voted for me," said Richard. "I have been in this industry for 35 years, 25 running my own business." 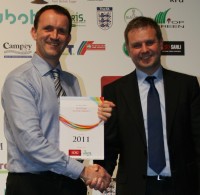 "I learned a lot in those early days but I owe thanks to two people in particular, both Head groundsmen at the time; Archie McTaggart, of University of London Motspur Park and Bert Flack from Old Trafford. I have never forgotton how they taught me the importance of instilling your knowledge in the next generation. Educating the young in the methods of 'best practice' is as important today as it was back then, and this is integral to the way we operate at Campey Turf Care. Thanks again to everyone for their recognition."